A Comedy of Errors, But The Show Goes On

The Republican leadership has been slow to release bills to the Senate floor, which allowed me time to focus on the work my district sent me to do. I filed two bills:

SB 339, A Medicaid Public Option: Modeled after Georgia’s successful Peachcare for Kids program — available to ANYONE, no matter your age, income level or insured status. Don’t like your private plan? You have another option!

SR 654, Funding for Public Transit: Proposes a constitutional amendment to allow the Georgia Department of Transportation to use gas tax revenue for public transit.

Unfortunately a stomach bug and a clerical error threw me a couple of curveballs this week. Thanks to a team effort, we were able to overcome them and keep things moving.

Was it Dual Enrollment or a Stomach Bug?

This week, the Georgia Senate passed HB444, which outlines program cuts to Georgia’s highly successful and popular Dual Enrollment program. The program allows motivated high school students to “Move on When Ready,” and take college and technical school classes free of charge, earning credits that count both for college and high school, and was a focus of our previous Lieutenant Governor, Casey Cagle.

Governor Kemp wasted no time last year targeting Dual Enrollment for cuts. The legislature is now fast tracking a bill through that only lets students “Move On” with half as many credits as before.

With college tuition crippling students with debt, Dual Enrollment has been a lifeline for Georgia families, including my own. It’s not an exaggeration to say I am heartsick about these cuts. But the morning the bill came to the Senate floor, I literally woke up sick. I was proud to remotely watch my Senate Democratic Caucus colleagues take up the mantle to defend Dual Enrollment and speak against the bill. Sadly, the bill passed along party lines, and will be going back to the House so that they can either agree or disagree to the changes made by the Senate. Call and email your house Representative and let them know where you stand on these cuts. 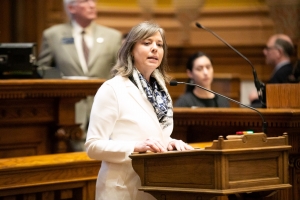 On Wednesday, I addressed my Senate colleagues after filing my signature piece of legislation for the year — a Medicaid Public Option that would allow ALL Georgians, regardless of age, income, or insurance status, to purchase Medicaid, at the same cost it takes the government to deliver the services.

I’ve heard from a number of constituents who have private plans with such high monthly premiums and deductibles that they have a hard time finding money to pay the doctor. They feel they have to forgo healthcare even though they have insurance. And they often can’t trust their health insurance because they get billed for services they thought were covered.

With a public option, the government sets the price instead of a for-profit company. This keeps prices down, increasing competition in the market to keep costs down for everyone, including those with private plans. The plan is modeled after the popular Peachcare for Kids, and would simply be another option on the marketplace that consumers could choose. Close to 20 other states are taking a serious look at how to make a public option work for them. It’s time Georgia does the same. 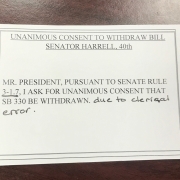 The concept of a Medicaid Public Option is new, so this was not an easy bill to draft. We went through multiple versions — so many in fact, that I inadvertently filed the wrong one! And I learned this week that some mistakes made in the Senate can be fixed!

A Course Correction, A Bipartisan Success, and Other Matters

Transportation: This week I filed a Constitutional Amendment to allow Georgia’s gas tax to be used for transit. Georgia’s Constitution currently only allows our gas tax to be used for roads and bridges. This is why we’re seeing managed toll roads instead of transit options to solve our traffic woes. Our Constitution is holding us back and we must change course. It won’t be easy — a Constitutional amendment requires two-thirds of the vote in each chamber and a ballot referendum. But it is time for that fight. 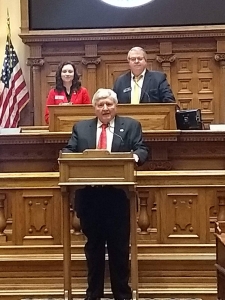 Speaking of transportation, it’s not often that Republicans and Democrats can all agree on something, so it was nice to participate in a rare example this week as the Gwinnett County Delegation voted unanimously to re-appoint Rudy Bowen, a long-time public servant, to represent the 7th Congressional District on the Georgia Department of Transportation Board.

Gangs: This week, the House and Senate Public Safety Committees held a joint meeting to learn more about gangs, a major focus of the Governor. Young kids are being recruited into gangs as early as elementary school age, so we must focus on ensuring Georgia’s most vulnerable kids see a better path through education and positive programming.We can’t arrest our way out of this problem, and we must tread thoughtfully and carefully. Georgia already has some of the toughest laws on the books. We must make sure that Governor Kemp’s efforts on gangs don’t undo the great progress former Governor Deal made during his term on criminal justice reform.

We’ll be monitoring this issue closely.

We only have five more days officially scheduled for this session, which will bring us to day 14. House Speaker Ralston held off on releasing the remainder of the calendar until he saw the Governor’s budget proposal. It’s anybody’s guess what happens from here! 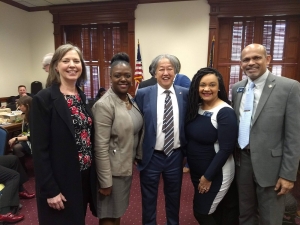 It was a pleasure to visit with CG Takeuchi, our new Japanese Consulate of Atlanta while having lunch with the Japan Caucus. 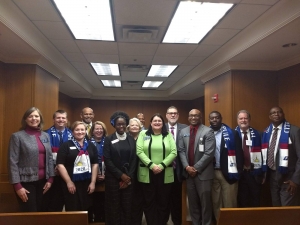 Good to visit with local elected officials from Chamblee, Norcross, Doraville & Tucker at Georgia Municipal Association Day at the Capitol. 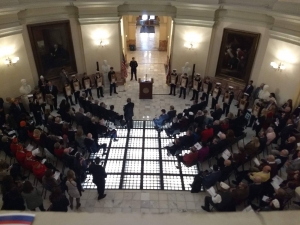 A beautiful event where my colleague Sen. Harbison was honored at the Georgia Military Veterans Hall of Fame Class of 2019 unveiling ceremony.