Putting on the Brakes

The legislature has burned through 12 of its 40 legislative days, and has passed very little legislation. The problem is the budget, but it’s more than that — it’s a constitutional crisis of the balance of powers between Georgia’s legislative and executive branches.

So far, the legislature is not having it.

Speaking of Brakes, “Have you driven on I-285 lately?” 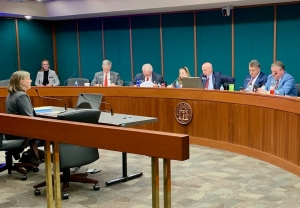 Telling the Senate Transportation Committee that SD 40 residents did not want “Spaghetti Junction on steroids.”

Last week I shared with you that I filed SR 654, which proposes a constitutional amendment permitting the Georgia Department of Transportation (GDOT) to use gas tax revenue for public transit. I filed this legislation because of the multi-billion dollar managed toll-lane project being planned by GDOT for the top end of I-285. Basically, we’re getting a toll road expansion, which no one seems to want, instead of rails and buses, because GDOT is limited by Georgia’s constitution to spending its $2 billion on nothing but roads and bridges. Our constitution is holding us back.

To my surprise and at the very last minute, I got word that SR 654 was scheduled for a hearing in the Senate Transportation Committee. My team scrambled to put together handouts, spread the word, and call experts to testify. Fortunately, the planets aligned, as it was lobby day at the Capitol for pedestrians and cyclists, who happen to be big transit fans. Several were able to attend the Committee Hearing. 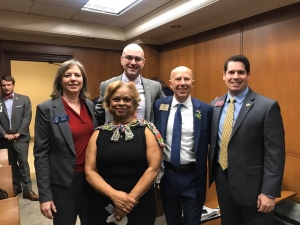 I was happy to see PEDS, a group that advocates for pedestrian-safe society, who were supportive of SR 654 which would provide more funding for public transit.

I’m extremely grateful to Mayor Lynn Deutsch of Dunwoody and Neill Herring of the Sierra Club for coming to testify, and to several Senate 40 constituents who came down to support the bill. Committee members are always on better “behavior” when they know a member’s constituents are in attendance. Together, we were able to pull together an excellent presentation that grabbed the attention of several news outlets.

Passing this constitutional amendment is a heavy lift, but the hearing opened up a productive dialogue with the Senate Transportation Committee about the need for dedicated funding for public transit. Chairman Beach, a fellow Atlanta suburban colleague, pledged to work with me on alternative solutions to public transit funding and I intend to hold him to it.

If you’d Iike to see public transit instead of toll roads, call or email Senator Beach and thank him for holding a hearing on SR 654 and ask him to keep his commitment to find more funding for public transit. 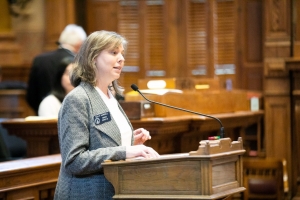 Last week, I announced my intent to file my “After School Recess Act,” a bill that bans graded homework for students in grades K-2. I’d like this bill to be bipartisan, if at all possible, so I pitched the bill to several of my Senate Republican colleagues. The response so far has been favorable and I got a commitment from the Chairman of the Senate Education Committee for a hearing and vote. This week, I’ll be following up with colleagues that said they’d consider co-sponsoring the bill before I file.

You may recall that the Governor vetoed a bill we passed last year guaranteeing recess for our youngest students, an issue I’ve worked on for decades. If kids don’t get recess during school, we should give parents the ultimate “local control” allowing them full choice in how to spend precious family time. 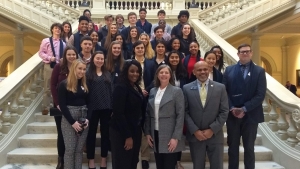 It was a pleasure to speak with this group of Dunwoody High School students on Advanced Placement Day at the capitol, sponsored by the College Board

In-State College Admissions: Higher Education was also high on last week’s agenda as I met with lobbyists from Georgia Tech and the University of Georgia about their opposition to SB 282, a bill that would require Georgia’s designated research universities to allocate at least 90 percent of its early admissions to Georgia residents. Those of us with college-aged kids know how hard it has become for Georgia students to get accepted to our own state-funded schools. Students paying out-of-state tuition bring significant money to our universities. Ninety percent may be a tough benchmark to set, but I appreciate the intent to keep our best and brightest in state.

Ironically, I learned in the Urban Affairs Committee that Georgia’s historically black colleges and universities (HBCUs) have the opposite problem attracting out-of-state students due to the higher tuition rates. Senator Lester Jackson presented a bill to allow Georgia’s HBCUs the ability to offer up to 10 percent of its out of state students waivers to receive in-state tuition. Current law only allows for two percent of out-of-state students to receive in-state tuition.

Annexation: With 10 cities and three counties in my district, this is an issue I work on quite often. When a parcel of land is annexed into a city, there are many implications to work through, with tax revenues and schools at the top of the list. Last week, I met with Peachtree Corners’ City Manager to discuss border issues with the City of Norcross. And our Dekalb Delegation meeting focused on a bill that we passed last year that separated the annexation of land from the annexation of schools, to prevent an unfortunate situation between the City of Atlanta and Dekalb Schools from happening again. But Governor Kemp vetoed that bill so we are back to the drawing board.

Coal Ash: The Natural Resources Committee unanimously approved SB 123, a bill that would raise the surcharge for dumping coal ash in Georgia from $1/ton to $2.50/ton, putting it on par with other types of dumping surcharges. Coal ash is a growing problem in Georgia. Georgia’s low surcharge brought coal ash from other states posing health risks to communities near the dumping grounds. A higher surcharge will help curb that problem.

That Dam Bill: I enjoy being on the Natural Resources Committee because I learn about things I might not otherwise. Last week, we had a bit of fun with that dam bill, SB 319, about building downstream from Georgia dams. Once a structure is built downstream from a dam, the dam becomes a Level 1 dam which brings a significant amount of state oversight and cost due to the safety concerns for the downstream structures. SB 319 aims to save the state and builders money by requiring structures built downstream to build to a higher standard to survive possible water flow and keep the dam at a Level 2 instead of changing it to a Level 1.

Bill Nigut’s Political Rewind: Did you catch me on Political Rewind discussing my Peachcare Public Option proposal to allow all Georgians to buy in to the state’s popular Peachcare program? If not, you can watch it here.

It’s Not Really a Break

Some committees will still meet during this week’s recess and we will be looking closely at the budget this week alongside Appropriations meetings of both the House & Senate.

We will not publish a Snapshot next week, and will return to our regular schedule the week after.