It’s time to reinvest in the people of Georgia.

Provide Healthcare for All

Healthcare should be streamlined, affordable, and available to everyone.

The reality is our market-based healthcare system might not survive the long-term economic impact of COVID-19, including the hardship of cyclical furloughs on healthcare workers and the growing numbers of people who are out of work with no health insurance. Since the onset of the virus, we have already lost another rural hospital in southwest Georgia.

With Congress failing to act on a national healthcare solution, there are multiple actions we can take at the state level. First, we can expand Medicaid up to 138% of the Federal Poverty level. This will bring a 90% match of federal dollars into Georgia’s economy — dollars that Georgia is already paying to the federal government, but not getting back. This money will bring people healthcare and jobs, especially needed in rural Georgia.

During the 2020 session, through the efforts of the Legislative Women’s Caucus which I co-chair, we succeeded in expanding Medicaid for mothers of newborns, allowing them to continue their Medicaid coverage for six months postpartum, rather than six weeks. Georgia ranks last in the nation for maternal mortality, and Black women are four times more likely to die as a result of childbirth than white women.

In addition to Medicaid, I filed legislation to create a Medicaid Public Option, modeled after the successful “PeachCare for Kids” program. This will allow anyone, no matter their income level, to purchase a “PeachCare” policy at the same cost it takes the state to provide the healthcare benefits. This additional choice, available to those not happy with their private, employer-based plans, brings competition to the healthcare market, potentially reigning in costs of other private market health plans.

I will fight to expand Medicaid in Georgia and push for the state to provide a Public Option for healthcare.

Public schools are the backbone of our nation’s economic, political, and social health. No institution impacts families and communities more than the local school system. We must guarantee early childhood education for every child in this country. We must create educational environments that adapt to student learning styles while still ensuring that kids are making progress. We must guarantee that qualified students can attend college and technical schools without the burden of large debts. The future of our country depends on taking all of these steps.

Three pressure points have developed within our education infrastructure that we urgently need to address.

First, early childhood education is often unavailable and unaffordable for working parents, causing many to miss out on early childhood educational opportunities. Universal preschool should be incorporated into the K-12 public schools. Wages for full-time workers need to be adequate for covering childcare costs and paid time off needs to be available for parents to take care of sick family members.

Second, adequate public school funding and more choices in instruction are needed. But, publicly funded vouchers to attend private schools or for-profit educational organizations, are causing a huge disparity in educational attainment and quality. We must help public school systems to develop publicly funded choices, such as special mission and magnet schools. No taxpayer should be forced to leave the public system to achieve success in educating their children.

Third, college costs have skyrocketed during the last few decades. A college student today would need to earn $46.32 per hour to work the same number of hours to pay for a semester of college that a student had to work to pay for tuition in 1981. Parents dig deep in their pockets and students finance their classes with debt. Other students with potential choose to not go to college because they don’t want the debt. Access to college both for young people and for older adult job retraining must be approached as long-term economic development of human capital. I will fight for legislation to make every public college and university in Georgia tuition-free.

Time spent sitting in traffic is quality time lost with family and friends. And cars on the road in traffic contribute to our poor air quality, threatening our atmosphere. Georgia needs leadership in clean energy transportation innovations that include: rapid rail connectivity between rural and urban communities; increased miles of hassle-free bus transportation; and electric car leasing that connects economic centers with rail.

The COVID-19 pandemic will force policymakers and employers to rethink transportation. First, employers can use this opportunity to rethink work-at-home policies with the potential impact of reducing traffic congestion. Second, as gasoline consumption plunges, so does motor fuel revenue.

As policymakers rethink resource allocations, I will ensure that funding for public transit becomes a critical part of the conversation.

The scientific community has come to a consensus that climate change is real. Politicians who argue otherwise are dangerously misleading the public and threatening our children’s future. We must take steps now to stop global warming’s devastating and potentially irreversible effects.

We must stop politicians who seek to prop up the dying fossil fuel industry and instead, reward research and development in clean energy. We must  continue to challenge the automotive industry to put their ingenuity to work to ensure Americans drive cleaner, safer cars.

We must ensure our students are being taught to respect science and the process of scientific discovery so they can continue improving the world after we are gone. We should engage our technical college systems in training displaced workers in learning these new technologies, taking the work ethic and resilience our state is known for and applying it to the challenges of the future.

There has been a significant lack of trust in our law enforcement officers in Georgia, due to multiple instances of racial profiling, excessive use of force, and a perceived cabal of protection officers give to each other to avoid punishment for inappropriate actions. These experiences have fundamentally undermined community belief in the ability of due process and of our government to protect and provide justice for our community members of color.

I am in favor of allocating more resources to social services that protect and promote healthy communities and reduce the need for law enforcement. I will work to increase the budgets for the Department of Child and Family Services, the Department of Behavioral Health and Developmental Disabilities, our public mental healthcare systems as well as unemployment training programs and safe housing for the homeless. I also will work to decriminalize marijuana and reduce existing sentences for possession of marijuana.

Powerful interests and elected officials have sought to rig the system so they can undermine our democracy. As we saw and several democracy experts have noted in the last election cycle, these officials have made real attempts to suppress voters and have participated in the egregious manipulation of the election process in order to benefit themselves.

The number one issue putting our democracy at risk is redistricting. Every 10 years, after the census is taken, state legislatures across the county “rebalance” the populations of political districts (from local to national) by adjusting the boundaries. We cannot allow our elected officials to gerrymander their districts according to partisan interests. Too many ‘safe’ districts across the country have been drawn to support only the voices of political extremes. I am a co-sponsor of “The Democracy Act,” which proposes to amend Georgia’s constitution to create an independent, non-partisan commission to complete redistricting, rather than the Georgia legislature.

Capitalism and free markets have made this country great. However, markets are not always the best solution for all of society’s problems and sometimes the pursuit of profit creates burdens for the public. Look at recent examples of a healthcare company polluting the air of a community in our state; of pensions wiped out due to CEO negligence; and of horrific working conditions among undocumented farm workers.

Government can serve an important role in keeping companies honest and fair actors in their interactions with our communities, and to do so, we must ensure that for-profit companies are not allowed to take over government services such as parks, public education, healthcare, and prisons. We have seen time and again how poorly for-profit enterprises handle people who are ill and how many for-profit educational institutions have robbed people of their hardworking money in exchange for poor quality and even poorer job prospects after graduation. And a vital part of our society is the successful rehabilitation of our incarcerated populations, who cannot effectively pay their debt to society if they are ill, malnourished, or forced to live in inhuman conditions.

I will protect and fund our most important government services so they are solvent and effective stewards of taxpayer trust.

The promise of democracy is a promise of equality; our country is founded upon the idea that all things being equal, an individual’s ability, effort and talent should determine their success, not their religion, race, gender, sexuality, or their parents’ wealth. For too long and still too often, we fail that test. It is time that we renew that promise, so that we can capture the best in American ingenuity without creating unfair challenges to success.

Every human life deserves equal respect and dignity. This includes everyone on our nation’s soil: people of all genders, races, sexualities, mental and physical capabilities, religions, and socio-economic class — no matter their nation of origin. 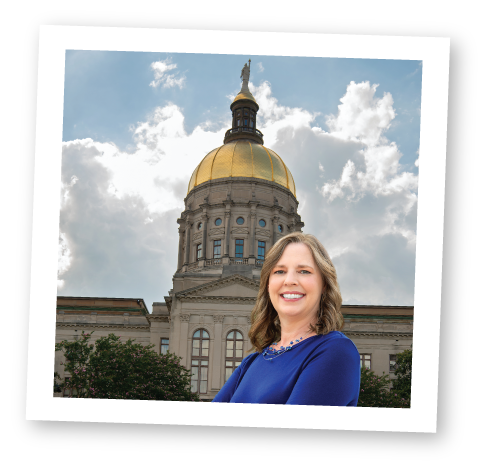 Here’s what constituents are saying about Sally’s Senate Snapshot:

“I appreciate your emails more than I anticipated.
They are informative while being upbeat.”

“I appreciate your updates and have read all of them. Thanks to you I feel I know more about what’s going on in the Georgia legislature than I’ve ever known before.”

“Your emails are so informative I suspect you have reawakened an interest in government by your constituents.”

“Again, I have to say that you write extraordinarily wonderful newsletters. I have to read them from beginning to end so I don’t miss a sentence where you nail the truth so well. You have a great sense of humor which is so important in today’s world.”

“I enjoy your newsletters so much. They always have all the information I really need to have.”

“Sally, your communication is spectacular!”

“I want you to know just how much I truly, truly, truly appreciate these electronic updates from you. They are filled with quality information and clearly convey the amount of effort you are expounding on the behalf of all Georgians.”