The Battle of the Budget 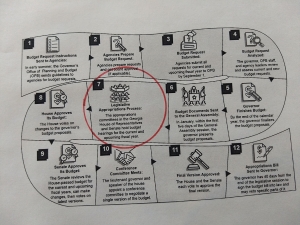 Georgia Budget Process – you are here.

The Georgia General Assembly traditionally holds budget hearings the second week of session, but the tone of these hearings was far from normal. The Budget Battle started last fall when the Governor ordered 4% cuts to the budget the legislature passed last year. Speaker Ralston responded by calling the entire House Appropriations Committee to Atlanta last fall. Then this month, he decided to pay the daily per diem of the entire House of Representatives — not just members of the Appropriations Committee — encouraging ALL Representatives to attend the hearings (sadly, the Senate did not do the same). Finally, the Speaker announced that he will not release a full session calendar until he has a sense of where the budget talks are going.

It took both me and my Communications Director, Amy Swygert, working full-time this week to cover both the budget hearings and some important in-district meetings. When Amy and I met to compare notes, we both realized the events of the week brought to our minds certain well known idioms.

“Don’t Count Your Chickens Before They Hatch”

Perhaps for the first time in Georgia’s history, despite strong economic times, we’re in major belt-tightening mode. This is because in 2018, Republican lawmakers counted on a windfall from President Trump’s federal tax package and passed an income state tax cut, while also doubling the state’s standard deduction. Revenues came up short, and now we have the painful task of deciding what we must do without.

“Pennywise and a Pound Foolish”

Governor Kemp has downplayed his proposed budget cuts, emphasizing the “common sense savings.” The truth is that our state departments have always looked for operational efficiencies. They come in every budget. The harsh reality is that this budget includes cuts at the expense of everyday Georgians.

Here’s just some of what we’re facing:

— There will be deep cuts to services that have been proven to help mentally ill patients stay in their homes, pay their bills, and avoid psychiatric emergencies. The Department of Behavioral Health & Developmental Disabilities warned that cuts to these preventive services could increase suicides and substance abuse. And it will put an enormous strain on the already overwhelming demand on our psychiatric hospitals and mental health facilities.

—- There will be significantly less money to monitor diseases and address Georgia’s already dismal maternal mortality and HIV rates. County health departments, which are the only health entity in some of our rural counties, will be the hardest hit.

— Our food, animals, and meat will be inspected less frequently.

— The Georgia Bureau of Investigation will have fewer resources to process the more than 44,000 backlogged crime lab cases. This means certain criminals who could have been prosecuted will roam our streets instead.

— There will be fewer public safety officers and staff in our prisons.

— The Georgia Board of Health Care Workforce will cut numerous initiatives such as loan repayment and medical education that seeks to improve access to medical physicians and specialists in mostly rural, underserved areas.

— As they presented their budgets, some department heads mentioned challenges with costly staff turnover because Georgia pays its employees sometimes as much as 40% under market rate.

Republicans and Democrats alike were dismayed at the proposed cuts. Lawmakers have worked hard to fund these important initiatives only to see them gutted. Representative Al Williams remarked “Whether you end up paying on the front end or the back end, it’s going to cost you.”

According to Georgia’s constitution, budget bills must originate in the House of Representatives. The first bill to make its way through the House will be the FY-2020 amended budget, followed by a second bill containing the FY-2021 budget.

“All Politics is Local” 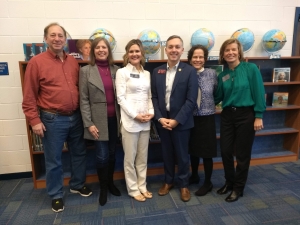 This week I joined several of my Dekalb colleagues to provide a legislative update at a joint meeting of the Emory LaVista Parents Council and the Peachtree Gateway Council on Schools to talk to parents around the district about education. Teacher salaries, testing waivers, dyslexia services, portable classroom conditions, and dual enrollment cuts were just a few of the topics we covered.

I also attended the Georgia Department of Transportation’s public information meeting in Chamblee about the top-end 285 toll lanes project which impacts most of my district. There I viewed a video animation of what the entire project will look like from west (Paces Ferry Road) up 400 north (North Springs) to east (Henderson Road). I was struck by the enormity of the project and the lack of long-term vision. We must eventually work toward traffic solutions that do not cater to single occupancy cars. I will have more about this issue in later “Snapshots.”

“Be True to Your Values” 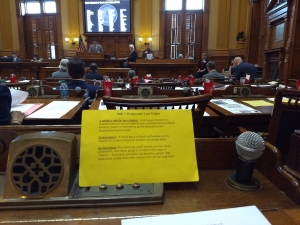 Next week, as the session begins in earnest, I will start rolling out my legislative agenda which is rooted in my core values — my trusty yellow card that I keep on my Senate desk — and based on feedback from you. The bills I’ll be filing are aimed at increasing access to affordable healthcare, improving education opportunities for all, and protecting our children and our earth.

I’m excited to share more details with you in the weeks ahead.