Otto von Bismarck is famous for his quote, “If you like laws and sausages, you should never watch either being made.” Because bills filed in 2019 carry over into 2020, the 155th Georgia General Assembly wasted no time in getting the sausage-making going again. 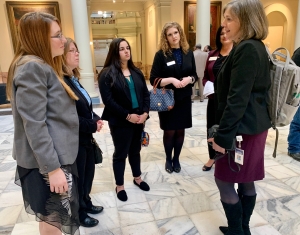 Bills that lack the power and push from the Governor’s office have a slower start to life. Likewise, bills that the Governor pushes can race right through the process like a greased pig. That’s why I spent the weekend prior to the 2020 session training Indivisible Advocates on how to utilize their networks to agitate and inspire the bill making process.

The second year of the biennium is fraught with political posturing since every member of the legislature is up for re-election (yes, that includes the Senate). But this environment actually provides a ripe breeding ground for making your voices heard. Even a handful of postcards or phone calls to a targeted legislator can bring an issue to the forefront, or strategically inject doubt.

If a bill you support is not getting traction, don’t fret. Passing a bill into law is not the only measure of success. Sometimes bills are filed to generate discussion, or to move the needle of public opinion. And if there’s a bill you oppose, by all means, BE LOUD and agitate, even if you live in a district where you don’t feel heard. Let your legislator know you’re there. 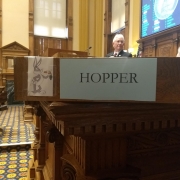 A bill begins with an idea. Sadly, many bills today are created by conservative “model bill” factories that provide fill-in-the-blank templates for legislators. But not all bills are made in a factory; better ones are home-grown. This week I dropped in the “hopper” two bills that came directly from conversations I had with constituents.

Local Control: At a Dunwoody town hall meeting, a constituent expressed concern about a new law mandating that all cities allow for wood construction in their building codes. This was clearly an example of an industry lobby pushing their agenda that directly conflicts with our cities’ abilities to set their own standards. I filed SB 292 to repeal that law and restore local control.

Speedy Tax Refunds: Another constituent asked me why it took so long to get his tax refund. When I called the Georgia Department of Revenue to find out, they couldn’t give me a good answer. So I sponsored SB 290, a bill that reduces the time it would take for Georgians to receive their tax refunds from 90 days to 30 days. 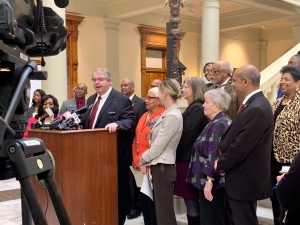 On Thursday, Governor Kemp laid out his priorities at the State of the State Address. But he was silent on our looming fiscal crisis. Georgia has always been a well managed, fiscally conservative state because we have purposefully underestimated our annual revenue estimates. But now for the first time, we’re facing revenue shortfalls thanks to Republican-created state tax cuts and overly optimistic revenue projections. Legislators in 2018 cut the income tax, trusting that a Trump tax reform windfall would fill the gap. But it did not, so we’re now having to find ways to raise revenue and make tough spending cuts.

Online Sales Tax: The Senate passed its first bill this year which will allow Georgia to collect more sales tax from Internet and app sales, just like we do for brick and mortar stores. This will help make up some of our revenue shortfall.

Dual Enrollment: Highschool kids who enroll in college classes are about to become the first victims of budget cuts. The Senate Higher Education Committee passed the latest version of HB 444. The bill restricts the number of credits that can be earned, the types of classes that can be taken, and limits enrollment to only 11th & 12th graders (current students are at least partially grandfathered in). I voted against the bill. 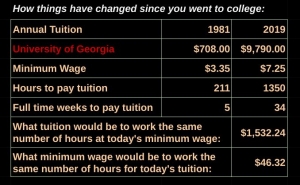 Cost of College: Rising tuition was not mentioned in the Governor’s speech this week, but it was high on my mind so I went to the Senate well to remind my colleagues that too many promising young Georgians are having to choose between taking on enormous debt for a college degree, or not going to college at all. My husband Jay and I now have two kids in college, and we are discovering all kinds of back-door tuition increases. Did you know in 1981, it was possible to pay for a year of college tuition with a summer job earning minimum wage? Today, young adults would have to earn $46/hour at a summer job to be able to pay for a year of tuition at the University of Georgia. College costs have skyrocketed while Georgia’s minimum wage, among the lowest in the country, lags woefully behind the times.

Dekalb Ethics: Now that voters rejected the very controversial proposal to revamp Dekalb County’s Ethics Process, the Dekalb House and Senate Delegations are working together for a solution. While many people want us to simply fix the Board appointment process that was rejected by the courts, there clearly are concerns among delegation members about the current process. A joint House and Senate Task Force will work through those concerns to come up with a solution. 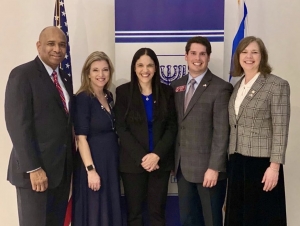 I enjoyed a wonderful dinner with the Consulate General of Israel to the Southeastern United States, Anat Sultan-Dadon, and some of my Democratic colleagues.

I look forward to seeing those of you concerned about the Georgia Department of Transportation top-end I-285 toll lane project at as many of the upcoming public information meetings as my schedule allows.

With the help of some of my constituents, I’m working with the Center for Pan Asian Studies to recruit pages, who spend a day at the capitol delivering messages to Senators inside the chamber. If you know someone who is interested in serving as a Senate page, please apply here.

And as always, please come to the Capitol for a visit! To set up a visit, or to get a message to me, please call my Administrative Assistant, Keridan Ogletree, at 770-463-2260.