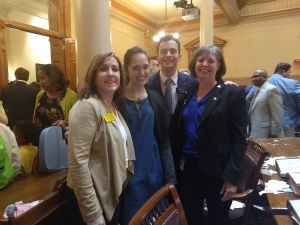 In the season of budding leaves, final exams, and tax returns, I want to pause for a few minutes to thank you for sending me to the Georgia State Capitol to be your voice. I am profoundly appreciative and honored to have been given that responsibility, and I hope that I rose to the challenge. While it was a much tougher legislative session than we all anticipated, it was still a pleasure to be there, at least on most days!

In my final email for the 2019 legislative session, I thought I’d share my reflections — the surprises, the wins and the losses.

Having grown up with Roe v. Wade in effect, it’s hard to imagine living in a country where abortions are illegal. Like many of us, until recently I took reproductive freedom for granted. I never imagined that a bill like HB481, the “heartbeat” bill that bans abortion at around 6-weeks, (before most women know they are pregnant) could pass the Georgia legislature. But I was incredibly proud of how forcefully the women of Georgia — doctors, mothers, and young women alike — spoke up against this hurtful, insensitive bill that won’t stop abortions. It will only stop safe abortions. The silver lining is that we’re already seeing that the backlash is fueling the recruitment of progressive candidates — particularly women — who will undoubtedly run successful campaigns to join the legislature in 2021.

What We Did Right — the Budget 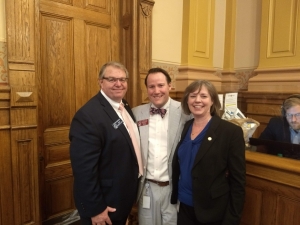 I’ve always been proud of Georgia’s fiscal health and I have great respect for Senator Jack Hill, who has chaired the Senate Appropriations Committee for a couple of decades. Sen. Hill knows the ins and outs of Georgia’s budget, and runs a very orderly process. This year’s budget passed with very little controversy, with teachers and mental health being the biggest winners. While 2018 was the first time in more than a decade that the education budget did not include austerity cuts, in subsequent years, we must do more for education. We must update the state’s Quality Basic Education formula, the spending per student ratio that dictates how we fund our schools. Georgia’s QBE formula is decades old and desperately needs an overhaul. But overall, Georgia is a fiscally sound state, as we have had good budget leaders for as long as I can remember.

The Biggest Win — No School Vouchers

The biggest win this year was blocking the passage of the Governor’s school voucher bill that would have been devastating to our already underfunded public schools. The original SB173 did not pass on the first go, and had we not flipped three Senate districts in 2017 and 2018 (Senate 6, 40 and 48), the outcome would have been different. SB173 almost gained a second life when it was attached to another education bill. We all thought arms would be twisted to get that bill through, but it never got to the Senate floor because the Republican leadership simply didn’t have the votes.

While I’m glad we did no harm to our public schools, the school voucher bill was a good reminder that we still need solutions for families whose needs aren’t being met in the public schools. Thank you to those who reached out to me to tell me your stories. Know that I heard you. The other big win this year was the dyslexia bill, a bill that my predecessor worked hard on. Now all Georgia school children will be screened for dyslexia and receive early intervention, and Georgia’s teachers will be better armed to help kids with dyslexia. I’d love to see a similar approach to other types of learning disabilities. This is how we fix public schools, not by taking money away and giving it to private schools.

During my campaign, I learned of some very distressing issues regarding slow ambulance response times. So I was pleased to learn about HB264, which sought to address some of the governance issues that impact ambulance contracts. It was a good bill that many people worked very hard on, including family members of victims who died while waiting for an ambulance to arrive. I was excited to vote it out of the Senate Ethics Committee. On Sine Die, I was crushed to read the Conference Committee Report on HB264. Several unrelated bills had been added to HB264 as amendments, including an amendment that attempted to weaken campaign finance laws by allowing large increases in PAC contributions. These last minute shenanigans were totally disrespectful to the legislative process, and to the victims. Ultimately, HB264 did not pass this year, so I am motivated to help clean the bill up next year.

The Biggest Area for Improvement — Healthcare 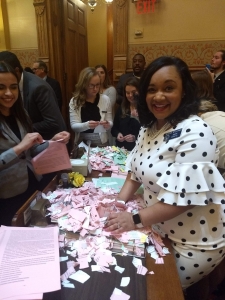 Sen. Nikema Williams, Chair of the Georgia Democratic Party, prepares her confetti for the last moments of Sine Die.

While there were some healthcare wins, such as Medical Marijuana Oil and Needle Exchange programs, we did not get the overhaul of Georgia’s healthcare system that is so desperately needed. Although our hospitals seemed pleased that the Governor was finally willing to introduce a weak Medicaid Waiver bill, the bar remains very low.  And while a compromise was reached regarding the CON regulatory system, for-profit healthcare still got huge exceptions written into the law. Access to affordable healthcare for everyone needs to continue to be a top priority for candidates as we go in to 2020 elections.

The Most Concerning Bill — School Safety

SB15 came out of the work of the Senate School Safety Study Committee, which in the aftermath of the Parkland, Florida school shootings, held six meetings throughout the state during 2018. The bill seeks to prevent tragedies by requiring threat assessments, drills and coordination among various authorities and governments. While on the surface it all sounds necessary and good, I have concerns about unintended consequences in its implementation. The bill mandates the collection and sharing of sensitive information and suspicious behavior, but does not define “reasonable suspicions,” which opens the door to broad interpretation and potential discrimination of minorities. It also weakens due process. I fear this could lead to increased imprisonment and deportation of people of color. I will continue to work with organizations such as Project South to track implementation issues requiring legislative action.

Transportation in Georgia became this year’s biggest political football. HB511 began as an ambitious proposal to create a coordinated statewide approach to public transit that would consolidate several state transportation agencies, raise money for public transit through a flat tax on ridesharing services, and allow local areas to raise taxes for transit projects which would have been a welcome opportunity for Georgia’s cities and rural areas. But when it stalled in the Senate Transportation Committee, it was combined with two other politically-sensitive topics — a jet fuel tax exemption for Georgia-based airlines and an airport authority that would oversee all of Georgia’s major airports, turning SB131 into a massive “frankenbill.” These types of bills normally don’t fare well and this one was no exception. It never came back to the Senate floor for a vote. 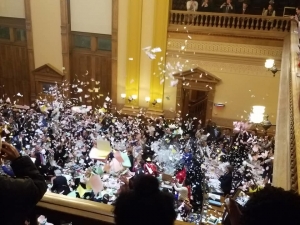 Sine Die – until next year!

Because this was the first year of Georgia’s 2019/2020 legislative session, we have a lot of unfinished business. Bills that were not passed this year still have a chance of passing next year. I look forward to returning to the Capitol next year to keep pushing for gun safety reform, education opportunities, and better solutions to Georgia’s healthcare. Until then, I’ll be continuing discussions with constituents and local leaders through meetings and events throughout Senate District 40. Stay tuned to my Senate Facebook page to see where I’ll be. I’m also checking my Senate email, so please feel free to reach out at sally.harrell@senate.ga.gov. I’d love to hear from you.