The last day of the 40-day legislative session is called Sine Die, Latin for “without a day,” meaning that the body adjourns without appointing a day to return. Sine Die is the trickiest day of the session, as bills sent over to the House begin returning back to the Senate with changes made, and the Senate must quickly vote to “agree or disagree” to those changes. It’s a perfect time to slip something controversial into a bill in hopes that no one will notice.

Georgia’s legislature is set up as a Biennium, or two year process. All bills introduced this year automatically roll over and can still be passed next year.

The Man Behind the Curtain

In previous Snapshots, I’ve mentioned the forces that influence the legislative process. But I haven’t talked much about one of the most powerful — Georgia’s Governor.

I have not seen Governor Kemp since the beginning of the session, but for the last few weeks, I’ve very much felt his presence. The Governor is the driving force behind a number of bills that advance his agenda, and his House and Senate floor leaders work to make that happen. 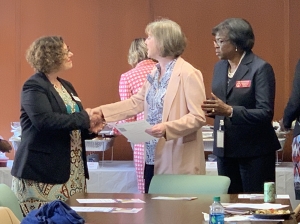 This week, I personally bumped up against the Governor’s agenda more than any other time in the session. I watched the Chair of the Higher Ed Committee act on behalf of the Governor by passing a bill out of Committee that had huge unresolved issues, cutting Georgia’s popular Dual Enrollment program (fortunately the bill was tabled on the Senate floor). The Chair of the Public Safety Committee told me that the Governor wouldn’t let him hold a hearing on my Campus Carry repeal bill. And throughout the week, we waited to hear whether Governor Kemp and Speaker Ralston would be able to whip enough votes in the House to pass HB481, the 6-week abortion ban. Sadly, this bill passed 92 to 78. Earlier in the session, the Governor pushed the voting machine bill, and though we defeated school vouchers on the floor of the Senate, the Governor’s voucher bill has been attached to another bill that’s on the Senate calendar for Sine Die.

The only force more powerful than the Governor is you — your voice and your vote. Imagine the impact of picking up 15 more House seats! Continue to put pressure on Senator Albers to advance SB50 to repeal Campus Carry. Write postcards to the Governor letting him know you want better gun safety laws in Georgia. The work doesn’t stop because the legislative session is over. Continue to BE LOUD on issues important to you.

At 4am Monday morning, my family awoke to the red lights of fire trucks and a dozen firemen running up my neighbor’s driveway. Thankfully no one was hurt and the fire was contained. But it was one of those life experiences you never want to have. 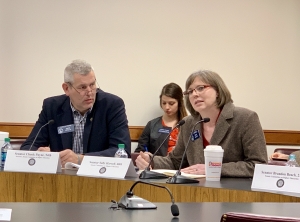 The scene at the Capitol was not much less chaotic. Not only did we feel the heat from the Governor, but committees and local governments raced to get bills passed before the end of our final full week. Bill substitutes and amendments were drafted at warp speed as last minute bill changes were made.

I was especially busy this week working to get local legislation for counties and cities in my district to the finish line. The week ended with marathon chamber sessions. Normally, we consider anywhere from three to 15 bills per day, but on Friday, day 39, we had 50 bills on the schedule!

Dealings with the DeKalb Delegation

Digging Deeper into Procurement: This week I filed SB 264, designed to make DeKalb’s procurement process more transparent by changing how procurement rules are set. Currently, the DeKalb CEO has the sole authority to set procurement rules; SB264 allows the Commission a voice in the process. A similar law to enhance procurement oversight passed in 2015, but a voter referendum was never held. The DeKalb Commission recently passed a resolution 6-0, with one abstention, in favor of a new effort for enhanced oversight. Once the bill is signed and approved by members of the DeKalb delegation, it will be on the Presidential primary ballot for DeKalb voters to approve. 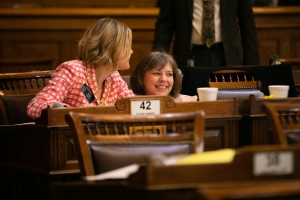 Dug-In About Ethics: The DeKalb House and Senate delegations worked to pass a bill to re-establish DeKalb’s Board of Ethics after the Georgia Supreme Court ruled the 2016 Ethics law unconstitutional. Early this session, the Senate delegation unanimously passed SB 7, a strong bill that addressed the concerns that the Ethics board should be appointed by elected officials rather than private groups. But the bill did not fare well in the House delegation and they ultimately passed a much weaker version. Negotiations are now underway to strengthen the bill again. I will not support a weak Ethics bill.

Something Fishy in Fulton

Do Fish Vote in Roswell? I got a surprise this week when I learned  that a tiny part of the City of Roswell extends into Senate District 40. It happens to be underwater in the middle of the Chattahoochee River, but it officially means that I have a vote in the Roswell delegation, the 10th city in my district. Senator John Albers, who represents most of Roswell, asked me to sign a bill increasing Roswell’s hotel/motel tax. I decided to leverage my new fish constituency to do some horsetrading. I told Sen. Albers, who is also Chair of the Public Safety Committee where SB50, my Campus carry repeal bill, was assigned, that I would sign the bill if he agreed to hold a hearing on SB50. To my dismay, he told me that Governor Kemp wouldn’t let him hold a hearing. After some intense negotiation, he finally agreed to help me get the Lt. Governor on board with a study committee on Campus Carry. We’ll just have to hold him to his word. If only the fish in the Chattahoochee could help.

Fulton Industrial Boulevard: The Fulton County delegation spent hours intensely debating whether the unincorporated Fulton Industrial district should be annexed into the city of Atlanta or the city of South Fulton, an issue that’s been contested for years. Because of two North Fulton precincts in SD 40, I had a vote in this debate. In the end, I supported annexing the area into the city of South Fulton. It came down to the schools in the area, which are currently being served by Fulton County Schools. While the City of Atlanta promised not to grab $10M of revenue from Fulton County Schools by annexing the area into Atlanta, I felt this issue needed to be resolved. 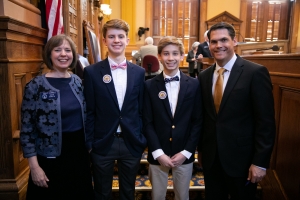 What About Brookhaven & Chamblee? Both Brookhaven & Chamblee residents will have the opportunity to vote on whether they want some homestead exemption property tax relief. Also, Brookhaven’s voters will have the opportunity in 2019 to vote on whether or not they want to extend the amount of time mayors can serve from two to three terms. I felt it was important for voters to weigh in on this decision through a referendum, as the original Brookhaven city charter limited the mayor’s service to two terms.

Gwinnett’s Next MARTA Vote, 2026?!: It’s common knowledge that you can impact the outcome of a referendum by choosing an election date with low voter turnout. This is why Gwinnett’s MARTA vote was held in March of 2019. Now, the Republican members of the Gwinnett delegation (Kirby, Barr, Rich, Efstration, Harrell & Clark) want to ban any more MARTA referendums until 2026. And they did this by amending a simple little GDOT bill, SB200. How’s that for progress, Gwinnett? Vote them OUT in 2020!

If you are able, please come visit the Capitol on Sine Die, Tuesday, April 2! We’ll start the day at 10 am and we’ll most likely still be voting late into the evening. You can watch from the 4th floor balcony. Let me know you’re there by sending a page note to me from the 3rd floor rope area. I’ll come out and say hi.

Reflections on the 2019 Georgia Legislative Session
Scroll to top