Do We Deliberate or Rubber Stamp?

I’ve always loved the idea of Georgia’s part-time citizen legislature. Our legislators serve for three months and then go home to resume their respective careers. This allows for a diverse group of people with everyday life experiences — farmers, funeral home directors, grocery store owners, car salesmen, real estate agents, doctors, etc. — to work together for the people of Georgia. 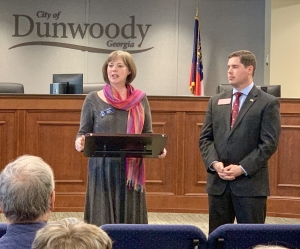 But the limited session means we’re always racing toward a deadline, be it Crossover Day or Sine Die, the last of our 40-day session. Bills are rushed. Mistakes are made. Debate and amendments are discouraged. Our bicameral legislature, designed to provide two distinct sets of fresh eyes to improve bills, suddenly becomes a rubber stamp. Other forces like gerrymandering — drawing district lines for partisan gains — create safe seats and give rise to extreme points of view as elections are decided in primaries. It hijacks our ability to compromise and ultimately forces us to focus on the most divisive issues rather than those that make people’s everyday lives better. We saw both of these dynamics come together in HB481, the 6-week abortion ban, which was neither a welcome nor well-thought out bill.

The good news is that good government is in our hands. We can continue to perfect our imperfect system through the legislative process, like The Democracy Act that seeks to reform our redistricting process, or by changing the people that make up the legislature at the ballot box. This session and this week demonstrated more than ever that we have some serious work to do in 2020 to reclaim our government to make it work better for all of us.

Where the Rubber Meets the Road 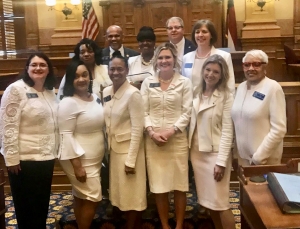 The floor debate on HB481, the 6-week abortion ban, scheduled for Friday loomed large and we met several times throughout the week to plan the Democratic response. The ladies of the Senate decided to wear white to honor those that fought for women’s rights before us. I focused my floor speech on what I learned during my campaign — many voters, even those who are staunchly pro-life, can agree on maintaining what Senator Jen Jordan called the “uneasy truce” of our current abortion laws. And if we are to be truly pro-life, we must do much more to feed, house, educate, and provide healthcare for Georgia’s mothers and children. The four-hour emotional debate and vote was a tough way to end the week.

Nearly every meeting leading up to Friday reminded me of the rush to the finish line with only a handful of days left in this year’s session. Too many bills are being rushed through. But the citizen advocates that were at the Capitol throughout the week bringing their personal experiences and expertise to impact policy were much-needed reminders of why we do this work, despite all the challenges.

Mandatory Recess: The Senate Education and Youth Committee finally voted on HB83, a bill that seeks to require recess for grades K-5. You would think that a bill this simple would be easy to pass, but I worked hard on this issue my last year in the House only to have it fail in the very last hour of my very last day in office. Rep. Demetrius Douglas has tried to pass this bill for the last three years. This current version is not perfect — it’s not what I tried to pass and it’s not what Rep. Douglas started with. It’s gone through lots of changes and compromises along the way. While I would have loved more time and opportunity to amend the bill, a wise and experienced Republican colleague reminded me that sometimes we have to start with the imperfect as a first step in order to get to a better bill later. With the help of some citizen advocates, including two fifth graders who came to testify, the bill passed the Committee. I look forward to voting for it when it comes to the Senate floor. 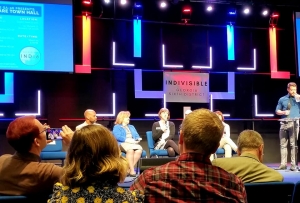 Protecting Georgia’s Shoreline: Serving on the Natural Resources & Environment Committee has allowed me to delve into studying many of Georgia’s environmentally diverse challenges. Thanks to HB445, I found out that a groin means something very different to shoreline protection than it does in other contexts, and beach nourishment isn’t about protecting native habitat! HB445 amends Georgia’s Shoreline Protection Act to give private homeowners along Georgia’s coast more control over land along the shore. And it provides a special exception to an area of Sea Island where a project is already underway to build high-end homes. Environmentalists strongly objected to these changes, arguing that current regulations are necessary to protect our eroding shoreline and that the Sea Island provision would set a dangerous precedent for other areas along the coast. The Democrats agreed with the Environmental community, voting against the bill and filing a minority report, which puts the minority dissenting opinion on the official record. The bill passed the Committee and will be on the Senate floor soon.

Ambulance Services: The Ethics Committee discussed HB264, a bill to improve oversight of the state’s ambulance services. I became aware of this issue during my campaign, as slow ambulance response has been a major issue for Dunwoody. Ambulance services are managed by the Division of Public Health and regional Boards throughout the state. When I originally researched this issue, I was troubled to see that the regional Boards were heavy on people in the private ambulance industry, which could lead to major conflicts of interest. HB264 inserts more transparency into the process by requiring anyone who lobbies the regional boards to register as a lobbyist. I would have loved more time to study the bill and think about other ways to improve the system. But like with all of the other Committees, we were pressed to take action on the bill as is and it passed the Committee.

After the meeting, I met Ellen Sims from Madison, Georgia who testified in the House hearing on HB264. Her mother tragically died from an allergic reaction to a wasp sting because the ambulance took 28 minutes to respond. She was with her 12 year old granddaughter at the time who called the police, but then had to watch her grandmother slip away because of the poor response time. It’s always an honor to meet people like Ellen who work to turn their personal tragedy into better policy for others. 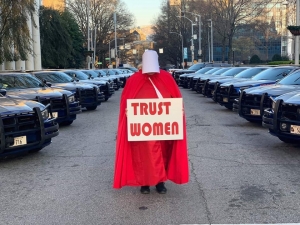 Gun Safety: I had two great meetings this week with citizen advocates working to prevent gun violence. Jeff Binkley, of Dunwoody, started Maura’s Voice, a new organization that will conduct and compile research and offer assistance to lawmakers to create effective policies on gun violence and violence against women in honor of his Jeff’s daughter, Maura, who was shot and killed in the hot yoga studio shooting in Tallahassee. Jeff educated us on red flag laws and the need for better profile standards and training for law enforcement and mental health workers to identify potentially violent men. Men who commit gun violence against women are not necessarily mentally ill as defined by the mental health community. They are more likely to have social disorders and find belonging in like-minded hate groups that radicalize them further. We need the right diagnostic tools to effectively identify dangerous individuals or we will inevitably miss some and unintentionally flag innocent people with mental illness. Researchers at Florida State University are developing an online certification program to train social workers on how to identify potentially violent offenders. Given my Masters in Social Work, Jeff encouraged me to take the course when it’s ready and I very much look forward to that and using that experience to create effective red flag laws for Georgia.

I also met with Kathryn Grant from the Campaign to Keep Guns off Campus. Kathryn will be a terrific resource and partner for the fight to repeal Campus Carry in Georgia. She has been compiling data on gun incidents on college campuses since our Campus Carry law has gone into effect.

Elder Abuse/Domestic Abuse: As we race to the finish line, meetings pop up out of the blue and sometimes it’s hard to find a quorum with competing priorities. Such was the case with our Special Judiciary Committee where the Chairwoman, Senator Jen Jordan, scraped together a quorum to vote for HB247, a bill to enhance penalties for elder abuse, sponsored by Republican Representative Deborah Silcox. But this meeting was worth the last-minute scramble as, much to Rep. Silcox’s surprise, Chairwoman Jordan introduced a significant amendment taken from her domestic violence bill that requires those convicted of domestic abuse to forfeit their guns. Jordan’s bill, which passed unanimously in the Senate Judiciary Committee, stalled in the Rules Committee thanks to pressure from the gun lobby. The all-Democratic Special Judiciary Committee voted unanimously for Chairwoman Jordan’s amendment and for its new vehicle, HB247. It will now head to the Senate Rules Committee.

School Vouchers: The school voucher bill, formerly known as SB173, that would have diverted anywhere from $50 to $450 million per year of public school funding to private schools, was defeated in the Senate just a few weeks ago. But it made a comeback in the Senate Education and Youth Committee as an amendment to HB68, a bill to prohibit certain entities from becoming a school scholarship organization. The amendment scales the program back from the original proposal to make it potentially more palatable to some Republicans that originally voted no on SB173, but we won’t know if it will be palatable enough to pass the full Senate. I know we must do more to help families with children whose needs are not currently being met in our public schools, but we must find solutions that don’t drain our public schools of desperately needed funds. I plan to vote no on HB68 when it comes to the Senate floor.

Extending Hope: The Higher Education Committee considered HB218 a bill to extend the time you can use Hope scholarship funding after graduation from 7 to 10 years. This allows for any delays in education due to life circumstances. The bill also excludes military service in the time counted toward Hope scholarship funding. The Committee will vote on this bill along with the dual enrollment bill next week.