Today was an emotionally draining and challenging day for me and for so many women watching in the Senate gallery and online. 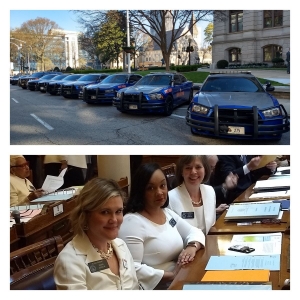 We listened to hours of speeches from both sides of the aisle about HB 481, the so-called “Heartbeat Abortion Ban.” You can learn more about the bill here.

If you are pro-choice and pro-women’s right to access reproductive healthcare, this legislation should deeply concern you. When Gov. Kemp signs it, this draconian law will make Georgia one of the most restrictive states for women’s reproductive rights.

Many of us are angry. Let’s use our outrage to a positive end.

Today is a turning point.

Today we commit to voting out every single politician who supported this bill.

And today, I warned Republican Senators what to expect.

The text of my speech in the Senate this afternoon is below. Keep it and remember.

The campaign to get these Senators and Representatives out of office begins… today.

There’s no better way to learn about the electorate than to go door-to-door canvassing. And I did a lot of that during my campaign.

Mostly, I just had friendly, neighborly conversations. But there’s one visit that really stands out in my memory.

The woman who answered the door was about my age: a mom, a teacher, a Catholic. She disclosed to me that she had historically supported Republicans.

I told her about my stance on healthcare, on public education, and on traffic congestion. She had me shake hands with her disabled son, and I shared with her my history of advocating for people with disabilities.

I could tell she wanted to support me, but something was holding her back.

She finally said that she had never supported a Democrat because of the abortion issue.  But recently, she didn’t feel like she could support Republicans.

And there I stood — a Democrat knocking on her door.

So, we talked about abortion. I explained to her how if Republicans were in charge, she could likely see major changes.

She shared that what she really wanted was for abortion laws to stay the same. She didn’t want to increase access, but she also didn’t want decrease access. Then, she paused. Could politicians focus on other issues instead of abortion, she asked?

Yes, I said. I could support that.

You see, what I learned in canvassing was that in my district, it’s not enough anymore to be pro-guns or pro-life, to get traditionally Republican votes. The old rules don’t apply anymore. People’s views have changed.

That mother I spoke with could see how deeply we are failing mothers and children in Georgia. How our infrastructure and limited resources are resulting in the preventable deaths of women who WANT to be mothers.

You see, people know the difference between being pro-life and just anti-abortion; between supporting mothers and babies by providing access to healthcare; and punishing women for the decisions they make.

People recognize when laws are being pushed that play only to the most extreme views.

Perhaps the woman I spoke with might agree with Benedictine nun Sister Joan Chittister, who said;

“I do not believe that just because you’re opposed to abortion, that that makes you pro-life. In fact, I think in many cases, your morality is deeply lacking if all you want is a child born, but not a child fed, not a child educated, not a child housed.”

She continues, “And why would I think that you don’t? Because you don’t want any tax money to go there. That’s not pro-life. That’s pro-birth.”

My voters have asked me: Why are Republicans not expanding Medicaid when our hospitals need the revenue to keep their doors open?

Why are we keeping Medicaid reimbursement rates so low doctors don’t want to participate?

Why are we not adequately funding our public schools?

Why do we spend less money on people with disabilities than almost any other state in the nation?

Why are Republicans so unconcerned that HB 481 could result in even FEWER doctors in our state available to deliver babies and care for pregnant women?

Well, I think increasing numbers of Georgia’s voters, especially female voters, are beginning to wonder the same thing. And thank God, women are voting and running for office more than they ever have before.

And come 2020, there will be more. And this bill — this hurtful, insensitive, not well thought-out bill, is going to help elect more women who will enact policies that prevent women from dying in childbirth, and who will ensure that Georgia’s children are fed, housed and educated.

Vote yes for this bill, and we’ll come for your seat. Because that’s how democracy works!