One of the things Democrats and Republicans can all agree on is that Georgia’s voting machines need to be replaced. They were purchased in 2002 and use a Windows 2000 operating system. Windows 2000 is so old, Microsoft doesn’t support it any more! What’s more, these old clunkers don’t even provide a paper trail for recounts and audits.

But what has become a partisan issue is the tools we use to assist in casting and counting our votes. Democrats want hand-marked ballots. Republicans want machine-marked ballots.

As a new Senator, I have heard from many of my constituents in Senate 40 that voting integrity is a key issue. So, I requested and was appointed to serve on the Senate Ethics Committee, which handles voting legislation.

I now find myself in the crossfire of cyber security experts, vendor lobbyists, the Office of the Secretary of State, and voting integrity advocates. All of these groups are trying to influence a $150 million dollar decision on which tools we will use to vote for at least the next decade.

At the center of the debate is HB316, a 41 page bill that combines both Republican and Democrat initiatives. In addition to voting machines, it addresses many of the failures of the 2018 elections: voters being purged from the rolls; absentee ballots being thrown out for “mismatched” signatures; voters turned away because the spelling of names didn’t exactly match official records; polling places that were suspiciously closed with little notice; and too few machines in certain areas, leading to long lines to vote.

HB316 contains some real improvements; it also enables the Secretary of State’s office to purchase what they see as “cutting edge” voting technology. You’d think that the new technology would be the most accurate and reliable, right?

I’ve heard from many experts on this issue who say we can’t guarantee that your vote will be accurately recorded if machines are used.

HB316 is said to be one of the most important pieces of legislation for consideration this year. So, in an effort to do my homework on the bill, I spent my weekend educating myself on voting machine systems. It wasn’t the most exciting way to spend a weekend, but I’ve learned a great deal.

The new systems have what Georgia voters want — a printed, paper ballot that contains the names of all of the people and measures that you selected. This paper ballot becomes the official ballot, securely stored and used in random audits. Sounds great, right? 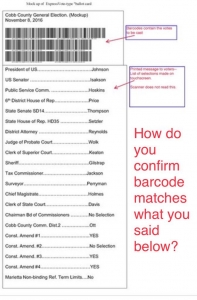 Except, there’s a pretty significant loophole…a scanner reads a barcode at the top of your ballot instead of the names you just checked. In other words, your votes are embedded in a barcode that you can’t read.

Though that’s the most egregious flaw, the more I researched, the more I found aspects of electronic voting that I found concerning.

Paper ballots are only summary representations — not the complete ballot. The thermal paper ballots that the machines print fades over time. Some electronic systems are not federally certified. Some machines have complicated ballot layouts that require huge, 32-inch screens. And some counting devices (scanners) are built in to the voting machines, which cyber security experts say poses a threat to security.

My takeaway is we won’t fix our election system if we spend $150 million on what’s described as the “latest and greatest” technology. And as expense goes up, security goes down.

On the other hand, on-demand ballot printers and scanners for hand-marked ballots look pretty effective and provide a primary source paper trail for use in audits. Initial estimates for hand-marked ballots come in cheaper, around $30 – 60 million. Interestingly, the Secretary of State estimates more than $200 million for paper ballots, but their numbers include huge printing overages that can be eliminated by on-demand printing.

The reality is this: We are going to get the more expensive system because that’s what Governor Kemp wants.

I co-sponsored SB196, which calls for hand-marked ballots, but it hasn’t yet gotten a committee hearing and we are running of out of time in this legislative session.

Ironically, as a member of the Ethics Committee voting on this legislation, even I, a member of the minority party, got asked out to dinner by one of the voting machine vendors. Unlike many of my peers across the aisle, I turned the invitation down.

I have my work cut out for me during the next few weeks as this debate rages on. I will do my homework and ask the hard questions. I will agitate. I will point out falsehoods. But in the end, I will also work to make HB316 a little better, even if I don’t support it in the end.

I won’t let Georgia’s legislators forget that elections are about people. Elections are the sacred guardians of the people’s choice. And no matter how amazing technology is, machines can’t replace people in ensuring free and fair elections.