On Tuesday, March 19, please join Representative Mike Wilensky, House District 79, and me for a community town hall meeting in Dunwoody at 6:00 pm at Dunwoody City Hall.

What Came Up and What Went Down This Week 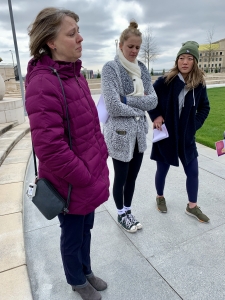 Turning Pain into Power: Monday morning I attended the launch of Maura’s Voice, a research & public policy initiative founded by Dunwoody constituents Jeff and Margaret Binkley, to honor their daughter Maura who was killed last fall in a Tallahassee yoga studio shooting. In the words of Jeff Binkley, Maura’s Voice was founded “ . . . to foster positive cultural change so that we can effectively address the entirely unacceptable epidemic levels of violence in our society.”

The Atlanta event was one of several around the country. A small and intimate group of Dunwoody neighbors, elected officials, and Maura’s friends gathered in the park across from the Capitol to commemorate this new organization and to celebrate Maura, who would have turned 22 years old that day. I got a little choked up as I acknowledged to Maura’s friends that they are part of a generation of kids who have grown up traumatized by gun violence, and that it is not their responsibility to fix it – it is ours.

The rest of the week reflected this event — a mix of ups and downs. Crossover Day — the deadline by which bills must pass in one chamber of the legislature to move to the other in order to be passed this year — brought an array of bills in both the House and Senate. We were able to pass some good bills and defeat some bad ones. But we also saw some bad bills pass while many good ones will have to wait until next year for another fighting chance.

The ups lifted our spirits while the downs strengthened our resolve to keep fighting.

Legislative Tricks as the Clock Ticks: Following Crossover Day, you might think bills that don’t make it out of their chamber are dead for the session. But it’s possible to get creative about turning ideas into laws without an original bill number. Commonly referred to as “vehicles,” legislators look for another bill that is in the same code section (so that it is “germane”), and they “link” their bill to another as an amendment. In fact, this can happen so often that they say a bill can become a “Christmas Tree,” carrying lots of ornaments it didn’t have when it started. I’ve even seen bills get “hijacked” — totally stripped of the original content and transformed into another bill previously thought “dead.” If you are tracking bills by number, keep an eye out – they may turn up under a completely different number before the session is over.

Gerrymandering & Pre-Existing Conditions:  Senator Elena Parent demonstrated this technique to us on Crossover Day when she introduced part of SR52 (The Democracy Act), as an amendment to a bill that shared a code section. While her amendment didn’t pass, she very much got the attention of our colleagues as she introduced the amendment at the well. And the Republicans who voted against it each cast a vote in support of gerrymandering (think 2020). Senator Jen Jordan did the same when she added an amendment to an insurance bill that dealt with short-term policies and pre-existing conditions. Her amendment, which she had tried for two years to pass as a bill, did pass, because Republicans figured out they should not cast a vote to legalize the denial of treatment for pre-existing conditions. It was fascinating to watch these legislators scurry around trying to figure out how to vote! 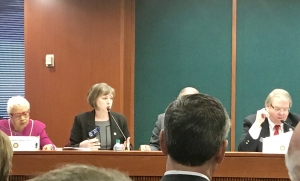 Voting Machines: The beginning of my week centered on HB316, a bill that seeks to address some of our election issues, including voter roll purges and Georgia’s exact match policy. I spent the prior weekend educating myself on the most controversial part of the bill — which kind of voting system Georgia will use for the next decade. On Monday and Tuesday I listened to public comments during the Senate Ethics Subcommittee on Elections meetings and on Tuesday evening, I attended Fair Fight Georgia’s hearing on voting machines. Those meetings reinforced that we have a lot of trust to regain with Georgia voters.

On Wednesday, the Chairwoman of the Senate Ethics Committee substituted a new bill for the bill the House passed and presented this bill to the committee. We were expected to vote on this bill at the end of the meeting, although we had not seen the changes to the bill before. Since HB316 already passed the House, it was not under the Crossover Day deadline so there was no reason to rush this very important discussion. Even so, I offered several amendments to try to improve HB316, including one that would ensure we buy a system that has a 100 percent human-readable ballot. Some companies provide a paper ballot that prints a list of who you voted for, but also embeds your votes in a barcode that is then read by the machine. That same amendment unanimously passed last year when the Senate considered new voting machines, but this year it failed along party lines. Overall, I fought hard, asked hard questions, and pointed out falsehoods during that meeting, but the bill passed along party lines. It will go on to the Senate Rules Committee next. 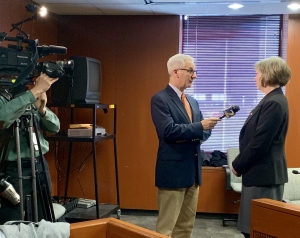 School Vouchers: While I was extremely frustrated with the process to consider HB316, I was relieved by the defeat of SB173, a bill that would have redirected anywhere from $48 to $540 million per year of public school funds into private school vouchers. This bill would have been so damaging to our public school system, especially after 16 years of severe underfunding, that a number Republican Senators abstained from voting and some even joined the Democrats to vote no. And while I was glad to see this bill voted down, I feel deeply for families whose children’s needs are not being met in our public school and are unable to afford the high price of specialized private schools. When we consider education policy, it is critical to recognize what isn’t working about our schools and remain open-minded to creative solutions instead of always sticking with the public school status quo.

Campus Carry Repeal: My goal for SB50, the Campus Carry Repeal, is to make enough noise that we get a public hearing by the end of this year’s session. Now that Crossover Day is over, we’ll continue our push. This week I met with March for Our Lives Georgia’s Co-Legislative Directors to discuss how they can help advance the bill. March for Our Lives is the student-led movement created in response to the shooting at Marjory Stoneman Douglas High School in Parkland, FL. I so enjoyed meeting with these leaders who brought their ideas about how to get students engaged. SB50 has been referred to the Public Safety First Responders Subcommittee so I encouraged them, as I do all of you, to contact the subcommittee Chair Senator Tyler Harper, (404) 463-5263, and Public Safety Committee Chair Senator John Albers, (404) 463-8055, to ask for a public hearing for SB50. 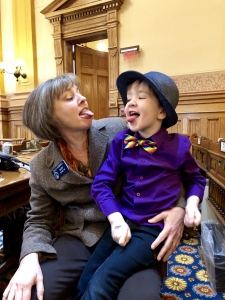 Vista Grove & Persistence: I know many of my constituents are interested in the status of the Vista Grove cityhood effort with Crossover Day behind us. Organizers were at the Capitol early in the week to lobby for HB 575, a bill to incorporate their area of DeKalb. But later in the week, Gwinnett County Representative Timothy Barr decided to remove his name as the bill sponsor because Committee rules require local bills to be sponsored by legislators that represent that area. But that does not mean that the work to determine what’s best for the Vista Grove area will stop. DeKalb County is about to launch a study with the University of Georgia’s Carl Vinson Institute to examine service delivery responsibilities between cities in DeKalb and the county to make sure that all areas in DeKalb are receiving adequate service levels from the county and are paying appropriately for those services. This will help DeKalb legislators do our due diligence and residents of the Vista Grove area make better decisions around this issue.

Yard Sign
Volunteer
DONATE
People or Machines — Who do YOU trust with your Ballot?