The Importance of Persistence

Last year, a campaign volunteer made me a bracelet bearing the famous phrase “Nevertheless, she persisted.” This week, I wore that bracelet to the Capitol because I knew we were in for a tough week. 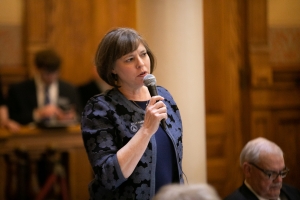 Being part of the minority party is much more challenging than being in the majority like I was during my time in the House. We’re playing defense, which requires teamwork and strategic thought. This week I worked hard to draft amendments to improve some bills, and spoke with colleagues — Democrats and Republicans — to gain their support. Despite all that work, many times it comes down to pure numbers and we can’t change or stop bills we oppose, like the voting machine bill in the House and the Medicaid bill in the Senate. And now we have a discriminatory, business-killing “religious freedom” bill in the Senate and two abortion bills in the House. There are so many fires to fight.

But the week ended with a great reminder that persistence pays off. When I was in the House, I worked hard on a bill to require mandatory recess in schools. The energy release during free play time is so important for child development and learning. Unfortunately, my bill didn’t pass. But late this week, I learned that the Senate Education and Youth Committee was considering a mandatory recess bill, SB210, similar to mine. I notified Dr. Olga Jarrett, a national researcher and expert on the benefits of children’s play, and asked her to come the next morning to testify. The bill passed unanimously out of committee and I’m hopeful it will get through both chambers and become law this year.

Sometimes bills sail through the General Assembly. And sometimes they take years to pass. Sometimes we’ll have influence and sometimes we won’t. We have to remember that we’re playing a long game. And so, we must persist. 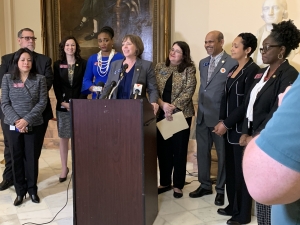 Some of the craziness at the Capitol right now can be explained by the “Crossover Day” deadline, March 7, which is the day a bill must pass one chamber in order to cross over to the other chamber and be passed this year. If a bill misses the deadline, it has to wait until next year for consideration. New bills are popping up everywhere, as are Committee meetings, to consider the bills. This week I spent time on a wide range of bills — everything from big picture state issues like Medicaid and voting machines, in-district issues like municipalization and annexation, and even industry and environmental issues like shellfish farming.

Medicaid Expansion: The week began with an intense debate on the Senate floor about SB106, the Governor’s bill to explore very limited Medicaid waiver options. The Senate Democrats fought hard to expand coverage to as many people as possible, but the Republican majority would not consider any amendments. During the floor debate, I took issue with the false narrative that Medicaid is “a broken system” and pointed out that the vast majority of Medicaid recipients are very satisfied with their coverage. Senator Nan Orrock reminded our colleagues that doctors are unsatisfied with Medicaid because reimbursement rates in Georgia are too low. But those reimbursements rates are set by the legislature, so if the system is “broken,” we know who to blame. Unfortunately, the bill passed the Senate.

Vista Grove: Vista Grove is a cityhood effort to incorporate the part of DeKalb where I live. I know many of us are frustrated by the lack of attention our area receives from the county, so last weekend I met with the Vista Grove organizers who have been very persistent in pursuing cityhood, after a similar city proposal was rejected by voters four years ago. Also this week, legislators who make up the DeKalb Delegation met to discuss Vista Grove and other cityhood efforts. When considering new cities, we must look at the big picture both inside and outside the Vista Grove footprint including impacts to the county and surrounding cities. DeKalb County is about to launch a study with the University of Georgia’s Carl Vinson Institute to examine service delivery responsibilities between cities in DeKalb and the county to make sure that all areas in DeKalb are receiving adequate service levels from DeKalb and are paying appropriately for those services. This will help legislators do their due diligence when creating new cities and reduce unintended consequences that lead to future disagreements. 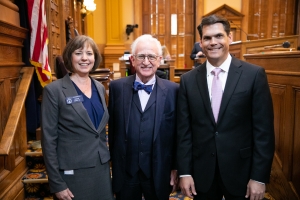 Each day, our “Doctor of the Day,” serves as the Senate’s Doctor in residence to take care of medical needs at the Capitol. I had the pleasure of introducing Dr. Donald Siegel, a retired Air Force Colonel, long-time trauma and general surgeon and Senate District 40 constituent

Norcross Annexation: While the DeKalb Delegation discussed municipalization, the Gwinnett Delegation discussed annexation. The city of Norcross wants to annex a large area of Gwinnett that would almost almost double the city’s size. They argue that incorporating that part of Gwinnett, which includes low income communities, could help strengthen the area with more responsive city services and development that could attract business and offer jobs closer to home. It’s a compelling argument for local control, but like cityhood, we must consider the larger issues and impacts to the county. Gwinnett County officials oppose this annexation due to reduced county revenue.

Voting Machines: Again, Democrats are playing defense on this critical issue. Early in the week, House Democrats fought to improve HB316, a 41-page bill that deals with many voting issues.  The bill passed the House and was assigned to the Senate Ethics Committee. Ethics was one of my top Committee choices because I wanted to work on this issue. The bill attempts to address many of 2018 voting issues like voter roll purging, the closing of polling places, and exact name and signature matches, but the heart of the debate is the purchase of new voting machines. Everyone knows the old machines need to go, and there is $150 million in the budget for new machines. But should we stick to hand marked ballots and scanners, as the cyber security experts say we should, or buy the latest and greatness technology because it’s easier to use?

I have co-sponsored SB196, which requires ballots to be hand-marked, but HB316 is moving quickly. Everyone agrees we need an auditable paper trail, but some voting machines print a ballot for you to verify, then scan a barcode to tabulate your vote rather than the list of names you just checked. After an extensive review of all the machines available, I’m concerned that we could spend millions of dollars for the “latest and greatest”, then be very disappointed. I will work hard to try to improve this bill, but in the end I don’t know that I can support buying immature technology with so many potential problems. It’s time to BE LOUD and call the Senate Ethics Committee Chair, Senator Kay Kirkpatrick, (404) 656-3932, and your own Senators and ask them to support an amendment to require printed ballots with no barcodes. 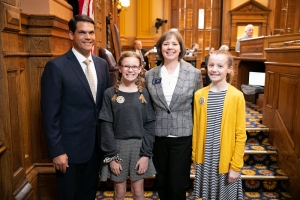 Shellfish Farming: Yes, I spent a hour this week learning about shellfish farming in coastal waters. In the Natural Resources Committee, we considered SB182, a bill to regulate oyster farming along the Georgia coast. This industry has never been regulated in Georgia before and this new system would establish a way for aqua farmers to lease acreage in intertidal and subtidal waters along the coast and set up their oyster farms. The bill passed out of the Natural Resources Committee and the full Senate and will be heading next to the House.

Creating Citizen Advocates: This weekend, I spoke to the Marching Buddies, a progressive group in Tucker, to help train everyday citizens to advocate for important issues at the Capitol. I took them through “How a Bill Becomes a Law” in Georgia and shared some of my personal experiences at the Capitol as we went through the steps. Citizen advocates are so critical to the legislative process, now more than ever. We need you to make phone calls, write emails, and to come down to the Capitol to meet with legislators and pull them out to the rope lines. Voters have the most sway over lawmakers. So please continue to push and be loud! And by the way, Marching Buddies hosts lots of great postcard parties. To join, visit their Facebook page https://www.facebook.com/MarchingBuddies/.

People or Machines — Who do YOU trust with your Ballot?
Scroll to top