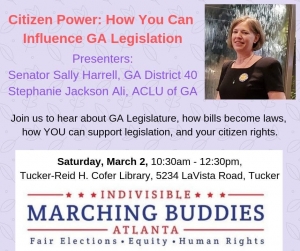 Next Saturday, March 2nd, I will be presenting, along with Stephanie Ali of the ACLU, at “Citizen Power!” hosted by Indivisible Marching Buddies of Atlanta. Join us Saturday, March 2nd, 10:30am – 12:30pm at the Tucker-Reid H. Cofer Library, 5234 LaVista Road, Tucker. We will be presenting on how a bill becomes a law, and how you can support and influence legislation. RSVP at https://www.eventbrite.com/.

Be Proud of Being Loud

This week a supporter told me he contacted his newly elected Republican representative to discuss voting machines, gerrymandering and Medicaid. Then he resignedly said, “He’s well indoctrinated into the Republican line of thinking and I got really nowhere with him.”

I know these phone calls may seem futile, but they matter. If we don’t make these calls, Republicans stay comfortably in their bubble, and they don’t realize we exist. We must agitate. Don’t forget – many of them know they must listen if they’re going to win their re-election campaigns.

As an example, this week after hundreds of Moms Demand Action advocates showed up to the capitol in their red t-shirts, a friend of mine overheard a couple of Representatives admitting that they knew they were going to have to give a little on gun issues, or they were going to continue losing more districts.

Showing up matters. Being loud works.

At the Gold Dome, we often refer to “working the rope-line.” When we say this we are describing the areas outside the chambers where school-aged “pages” serve, waiting to deliver messages to legislators inside the chamber. If the legislator is able, he or she comes out to talk with constituents across the rope that divides the page area from the public area.

I love coming out to the rope line to meet people, and this week I got so many page messages that I had a hard time keeping up with the debate inside the chamber! It was a busy week for citizen groups who came out to influence legislators on their issues.

Redistricting Reform: I joined dozens of Georgians from across the state at an Advocacy Day event organized by the ACLU, Common Cause Georgia, and Fair Districts GA to advocate for SR52, The Democracy Act, sponsored by Sen. Elena Parent. The bill calls for greater transparency, stronger redistricting standards, and an independent bipartisan redistricting commission, modeled after California’s commission. Twenty one states now have some form of non-partisan or bipartisan redistricting commission. The only way our lawmakers will consider this issue is if you get loud and demand it. In addition to your representatives, call Senator Matt Brass, Chair of the Senate Reapportionment and Redistricting Committee, (404) 463-1376 to ask for a hearing on SR52 and sign up for Fair Districts GA action alerts to help continue to push for this bill. Finally, this bill needs a state-wide push, so think about who you know across the entire state who would be willing to make a call to their legislators, and reach out to them.

Improving Our Voting Process: So many voters packed the House Elections Subcommittee hearing to oppose HB316, a bill to reform Georgia’s voting processes, that the AJC took notice and reported on it. Melanie Manning and Betsy Shackelford, who both worked hard on my campaign, testified at the hearing. Melanie asked the committee to keep the current ratio of voting machines to voters at 200:1, instead of increasing it to 250:1. She saw first hand how under-resourcing at a polling location led to long lines and frustrated voters leaving without casting their vote. Betsy spoke eloquently to dispel the myths about handmarked paper ballots, what she called the “state of the art” gold standard for secure voting.

House Minority Leader Bob Trammell offered an amendment in sub-committee to require that paper ballots be printed and machine read in a human readable format, rather than an unreadable barcode. The amendment was defeated but Rep. Trammell said they picked up one Republican and there was a considerable amount of interest in the amendment. The bill passed out of committee and will likely pass the House this week and make its way to the Senate, where further improvements can be made. 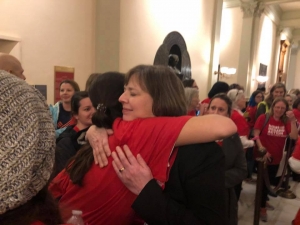 Giving a hug to a student at Moms Demand Action Advocacy Day who was there to honor her friend, Maura Binkley, who was tragically killed in a yoga studio shooting in Florida.

Responsible Gun Ownership: Last year I was one of the many moms, dads, and students advocating for gun reform at the Capitol for Moms Demand Action Advocacy Day. This year, I was thrilled to speak to the group as a newly-elected Senator now able to advance the fight with SB50, my Campus Carry repeal. This day will definitely go down as the highlight of my session.

The thing about Moms Demand Action is that many of their members carry the intense pain of having lost loved ones to gun violence. But they are there turning their pain into power, and I’ve honestly never felt as much collective power as I have at Moms Demand Action Day at the Capitol.

We gave each other many hugs across the Senate rope-line, and those hugs and cheers from so many friends, constituents, and supporters were incredibly uplifting. I brought all of that power and energy with me to my very first appearance later that day on GPB’s “Lawmakers” program. It reminded me that my most important role is to be your voice when you can’t be present at the Capitol. 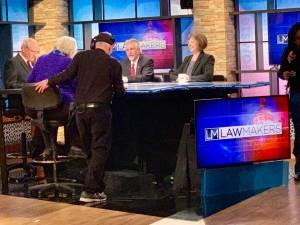 Thank you to everyone who has been getting the word out about Senate Bill 50, my bill to repeal Campus Carry. We are flooding social media, keeping phone lines busy, and having personal conversations at the “rope lines” outside the House & Senate chambers. I am hopeful that Sen. John Albers, chair of the Senate Public Safety Committee, will soon schedule a public hearing for the bill.

Addressing Dyslexia: Every once in a while, there’s a bill that everyone can feel good about. SB48 requires schools to identify and support kids with dyslexia in their early school years and provide more dyslexia information and support to teachers and schools. Led by my predecessor, Senator Fran Millar, this was a well-studied effort and well-written bill with a great deal of citizen input and support. Advocates for the bill were at the Capitol last week for Dyslexia Day to push for its passage. And this week, Senator Millar joined us on the Senate floor to watch it pass unanimously. 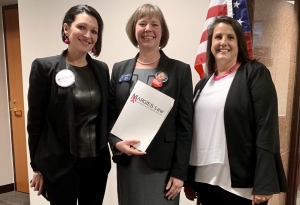 With Margie Singleton and Lisa Walls, two friends who created Margie’s Law to inform women with dense breast tissue that they may be at higher risk for breast cancer.

Breast Cancer Education: Margie’s Law, HB62, is a bill advancing quickly through the process of becoming law. What’s significant about this bill is not only what it does, but how it came about. Margie Singleton and Lisa Walls, from the Savannah area, came by my office this week to tell me about their bill. Margie and Lisa aren’t professional lobbyists or members of a major advocacy organization. Margie is a breast cancer survivor who was diagnosed 6 months after a clean mammogram.  Lisa is a healthcare professional who didn’t know about the risk of dense breast tissue until she heard about Margie. Together, they saw a need and launched their own effort. Margie’s Law requires health facilities that perform mammograms to inform any patient who has dense breast tissue that they need to obtain further screenings.

Healthcare: The Senate Health and Human Services Committee held a restricted debate on SB106, the Governor’s Medicaid Waiver bill. Previously, I reported that the Governor proposed spending $1M for experts to study Medicaid Waivers. In the 2018 – 2019 Amended Budget, which has now passed the House and Senate, this amount was increased by $600,000, and brings in a Federal match of another $1M. That’s $2.6M in taxpayer money to study an already well-studied issue. The research shows that full-scale Medicaid expansion works to increase healthcare access, decrease insurance premiums, create jobs, and put people back to work. Call the Governor’s Office at (404) 656-1776 and the Lt. Governor’s office at (404) 656-5030, as well as your own representatives to oppose SB106 and the lucrative “Medicaid Waiver Study Contract.” 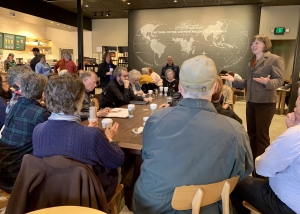 A crowd of 40+ joined us for our Coffee Chat with Sally in Dunwoody.

My next Coffee Chat will be in Chamblee at 10 am on Saturday, March 16th. Location TBA.

Save the date for these upcoming joint Town Hall Meetings with House Representatives in Senate District 40: