On March 12th, 2020, the legislature was suspended on day 29 of a 40 day session. On June 15th, three months later, the Georgia General Assembly will return to work to finish the last ten days of the legislative session.

How the Next Ten Days Will Work

During the time between when I served in the House and when I was elected to the Senate, I occasionally had a dream that I was back in the legislature, but instead of sitting in the chamber, I was relegated to the “overflow” room.

For the next two weeks, until Sine Die, I will literally be in the overflow room, watching the session through video streaming instead of my seat in the chamber. In order to adhere to physical distancing, only designated leaders of both Parties will actually be in the chamber. If we want to speak, we must notify the leadership, entering the chamber only temporarily. We will be called in to vote in small groups. Like one-way grocery store lanes, there’s a diagram showing us where we enter, the direction we walk, and where we exit. 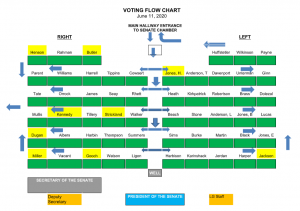 There will be no student Pages, no special presentations, and the press will be in the gallery instead of the people. There will be no rope line to greet constituents, and, of course, no hand shaking. Those who want to watch democracy in action will have to do so through streaming on the internet. Committee testimony by the public will be limited due to lack of space.

Debate, both by the people and the legislators, will be severely limited. While this new way of getting our work done might be necessary, it is not good for democracy. Let’s hope it’s short-lived; let’s get through the next ten days; and then get busy on those November elections!

The state budget begins in the House: According to Georgia’s constitution, the state budget must begin as a House bill, and prior to the suspension of the session, the House passed its version of the budget and sent it to the Senate. But now the state’s projected revenue is at least 11% lower than the revenue estimate the House based its budget on — so for all practical purposes, the budget process must start over — in the Senate. For the last three weeks, the Senate Appropriations Committee has been hearing testimony from State Department heads, who were ordered by the Governor to cut budgets by 14%. In watching these hearings, it’s clear to me that Georgia currently lacks the revenue it needs to do what it is mandated to do. But still, according to Georgia’s constitution, the legislature must pass a balanced budget. The Governor, in consultation with the State Economist, will set a revenue estimate, and the legislature must budget within that estimate. If we had national leadership, I believe at this point the federal government would be bailing out the states, as states cannot “print money” as congress can. Without federal help, or without a tax increase, schools across the state will lose another 1.5 billions dollars, on top of the 9.2 billion they have lost since the 2008 Great Recession. Georgia cannot afford another lost decade.

It is clear from the number of emails I have gotten that the people of Georgia want a Hate Crimes bill to pass. And I am very hopeful that this will happen before the last day of the 2020 session.

Many people have also communicated with me that it’s not enough just to pass a Hate Crimes bill — that we need additional legislation addressing police brutality and the repeal of laws such as Stand Your Ground and Citizen Arrest laws. I agree. But because it is past Crossover Day, according to the legislative rules, we can no longer act on bills that haven’t passed their respective chamber. While rules can be waived, they cannot be waived without the support of the Majority Party, which we do not have at this time. The Democratic Party in both the House and the Senate have unveiled legislative packages that can be acted on when we reconvene in January 2021, following the November elections.

We are able to pass the Hate Crime bill, HB 426 now, because it already passed the House with bipartisan support. Until now, the Senate Judiciary Chair, Sen. Jesse Stone, has refused to hear the bill in the Senate Judiciary Committee. But due to the upset over the brutality in the murder of George Floyd, and now the Atlanta police murder of Rayshard Brooks, and your emails to Sen. Stone, the political environment has changed. On the second night of the Atlanta demonstrations, Lt. Governor Geoff Duncan placed personal phone calls to members of the Senate Black Caucus, asking for their input on what needs to happen. Shortly after, he released a statement calling for the strengthening of HB 426.

Expect there to be some back-and-forth between the House and the Senate on the Hate Crimes bill. Many are asking for the bill to be passed unchanged, but some say the bill as passed by the House is weak. If HB 426 is changed by the Senate, it must be voted on again by the House, as they must agree or disagree with the Senate changes. Because HB 426 passed the House narrowly, House members are concerned another vote could jeopardize the passage of the bill. But clearly, the political climate has changed since the House voted on HB 426. The Republican leadership in both the House and Senate now want this bill to pass.

Why is HB 426, as written, weak? Because it is merely a penalty enhancement bill, which would put it among the five states with penalty-only statutes. In addition to penalty enhancement, other states include independent crime offenses, training, data collection and civil action. Incidentally, Georgia already has statutes on two independent crime offenses, including crossing burning (O.C.G.A. 16-11-37) and church vandalism (O.C.G.A. 16-7-26).

The Lt. Governor, who presides over the Senate, said in his statement that he would like to add training and civil action to HB 426, which would make the bill somewhat stronger.

The purpose of any law is to create an awareness of the parameters that society will tolerate, and to set penalties for behavior that cross these lines. In that regard, passing any kind of Hate Crimes legislation in Georgia is a huge symbolic step forward, and will create the positive momentum for bringing about further change.

If the June 9th Democratic electoral turnout is predictive of November elections, we will take additional seats in both the Georgia House and the Senate to help pass these “Justice” bills next year. Picking up 16 seats in the House would end the Republican majority and the political gerrymandering they are planning in order to rig the system for another decade. An increase of five seats in the Senate will close the gap, slowing the far-right agenda and putting Georgia back on the track of progress. We have great candidates in all those districts, so let’s support them, and give Georgians a reason to go vote!