Demonstrations and protests during a pandemic are unsettling. Many have asked me, “what can we do?” To start, we need to listen to black people. Last week, my neighbor Deontez Winbley published an essay on Georgia Public Broadcasting’s news website about the need to be uncomfortable, and he has given me permission to reprint it here.  Please hear what Deontez has to say. After reading, I hope that you’re motivated to do more, and there are some calls to action at the end of the email. –Sally

The recent protests in response to the death of George Floyd have sparked a lot of discussion, activism and social unrest. I write this to provide what I believe is necessary context and perspective. —Deontez Wimbley

I would like to believe that everyone understands why this weekend happened, but I do not want to rest on that assumption. People are BEYOND tired. Literally since 1619, Black people in America have been working generation after generation to be treated like human beings. Unfortunately, federal and local policies have not been sufficient at achieving that goal. The discontinuation of the trans Atlantic slave trade did not do it. The signing of the emancipation proclamation did not do it. The 13th, 14th, and 15th amendments did not do it. Brown v. Board did not do it. LBJs civil rights legislation did not do it. The 1990s crime bill set us WAY BACK. And even electing America’s first Black president DID NOT DO IT.

At this point people are wondering what is there to do. I do not want to be misinterpreted as thinking these vital pieces of policies did not do anything, but they did not fully achieve the goal of Black people being treated as full humans in this society. So the first purpose of the protests is to work towards raising public consciousness on the value, beauty, and humanity of Black people.

The protests were designed to deliberately disrupt the comfort of this city and ultimately this nation. In disrupting the city’s comfort, the city is forced to evaluate its consciousness.

There has been considerable discussion about the rioting and looting. Let me be clear. I did not participate in the rioting and looting and I do not think that such actions are the answer. I do want to offer a perspective on why some feel it is. For far too long there have been people who have cocooned themselves in the comforts of their luxury homes, turning a blind eye to the injustices faced by people a few blocks away. The means many believed will wake them up is to do strategic destruction.

From downtown to Buckhead, everyone is thinking about black life, suffering, and injustice, and that matters. Today, folks can’t just run to Lenox and the CNN center to continue to ignore injustices in the world. They have to pause. They have to reflect. The city has to wonder how to rebuild from this. The comfortable have been afflicted.

We see how quickly Mayor Bottoms terminated the cops for excessive force on the two AUC students. This is the result of protest. The ten tolerance is slowly making its way to zero tolerance. You know what is taking it there? Voting didn’t do it. A petition didn’t do it. Volunteering at a shelter didn’t do it. DISRUPTION is doing that. CHAOS is doing that. PROTEST is doing that. Let me be clear. I vote in EVERY election. I sign petitions AND volunteer with my community EVERY WEEK. But I know this is not a one solution issue. These measures happening are going to wake up this nation and make all of us uncomfortable.

The overwhelming masses of protesters DO NOT believe in rioting and looting. They simply want to be heard and seen. Anyone who thinks otherwise, is being disingenuous. Young people DID listen to the voices of the mayor, Andrew Young, and other members of older generations.

Look at the actions that took place on the 17th street bridge Sunday evening. It was strategic. It was unified. It was disrupting. I will even say for many, it was cathartic. I call on elected leaders, public intellectuals, journalists, clergy, business leaders, and others to listen to our voices, take seriously our concerns, and work on a multi-pronged platform to lead us to liberation.

I call on white people to do some deeply uncomfortable introspection, examine unconscious and conscious biases, and have conversation with each other about the “isms” that are so rooted in their hearts and minds. White supremacy is like rain. It drenches us all. It just drowns some, while others get to float. 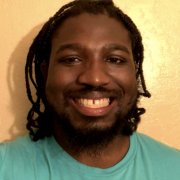 Deontez Wimbley lives in Senate District 40 in north DeKalb County and works as a health educator.

He says about himself, “I am a millennial born and raised right here in Atlanta. I am a PROUD Grady baby, and I am a PROUD Black, Gay man.”

This essay was originally published by GPB at https://www.gpbnews.org/post/opinion-protests-are-needed-disrupt-our-comfort, and includes audio of Mr. Wimbley reading his essay.

What Can I Do? — Calls to Action

Help pass HB 426, Georgia’s Hate Crimes Bill. The bill is stalled in a Senate Committee.  Call or email the following people and ask them to move the bill to the floor for a vote. While you have them on the phone, also ask them to repeal the “Citizens Arrest”, and “Stand Your Ground” laws.

Passing a Hate Crimes bill is a big step for Georgia, but we must also address police brutality head-on. In 2015, following Michael Brown’s murder in Ferguson, Missouri, President Obama convened a Task Force on how to prevent police brutality. The final report, “The President’s Task Force on 21st Century Policing”  provides a roadmap that is still very useful and relevant today.

Based on the 21st Century Roadmap, Campaign Zero has continued to provide research-based action steps for eliminating anti-blackness and police brutality. Use this site to educate yourself on what kinds of things can be done at the federal, state, and local levels.

The Legislature Goes Back To Work
Scroll to top