Georgia’s Health is on my Mind

Come share a cup of coffee in person at my next Coffee Chat with Sally. We’ll be in Dunwoody at the Georgetown Starbucks at 10 am on Saturday, February 23. It’s just a casual conversation about whatever’s on your mind. Bring your friends and neighbors. We’ll also soon be announcing our State Senate 40 Town Hall Meetings coordinated with your State House Representative.

With the pace of bills to vote on picking up now, I placed on my chamber desk my Yellow Values Card that I originally wrote when I served in the House of Representatives. Many of you heard me talk about these values during my campaign. And, this week I gave a Values Card to each of my fellow newly-elected Democrats in the House and Senate.

Both can impact Georgia’s healthcare delivery system for many years to come, and the current trajectory will leave more people without healthcare. 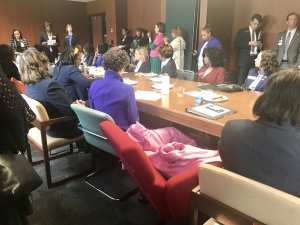 The Healthcare Crisis: The GOP introduced two bills — SB106 and SB74/HB198. The first, dubbed “The Patients First Act,” is the Governor’s proposal to explore very limited Medicaid expansion options. The second is a plan to eliminate Georgia’s Certificate of Need (CON) program which protects our hospitals and helps ensure access to care for all Georgians (see this article for good background on the CON debate). The first bill doesn’t go far enough to cover all Georgians that need healthcare while the second eliminates regulations that protect Georgia’s hospitals from going bankrupt and protects patients from predatory practices. Without fully expanding Medicaid, it’s irresponsible to eliminate the CON program when our hospitals are already struggling.

Moms and Babies Reveal Georgia’s Ill-Health: Georgia ranks among the states with the highest maternal and infant mortality rates. Representatives from the Georgia Department of Health spoke to about 75 people at this week’s Legislative Women’s Caucus, a group I co-chair. We learned that many moms die from complications that occur weeks after giving birth, when Medicaid benefits run out. These are not easy issues to tackle, but I am grateful that Georgia has a Maternal Mortality Review Board that looks at every single death to determine trends and recommend solutions.

Coal Ash Storage: The House & Senate Natural Resources & Environment Committees held a joint session this week to hear presentations on the issue of coal ash and what’s being done to prevent spills and protect against coal ash storage failures. I was very happy to see Tina Wilkerson, a constituent who has championed clean energy as a leader of Solarize Dunwoody, at the meeting. Coal Ash storage is a huge issue for Georgia. As long time lobbyist Neill Herring says of current storage inadequacies, “It’s like putting poison in a cardboard box and saying the cardboard is safe.” 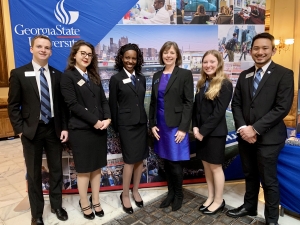 Great to meet Georgia State students visiting the Capitol who gave my Campus Carry Repeal bill a thumbs up.

College Loan Defaults and Professional Licenses: The Higher Education Committee discussed SB92, a bill that prohibits all state boards that issue professional licenses from refusing, suspending, or revoking the license of anyone who defaults on their student loans. It simply doesn’t make sense to take away someone’s livelihood when they have loans to repay.

Speaking Out on Gun Safety: On the first anniversary of the tragic shooting at Majority Stoneman Douglas High School in Parkland, Florida, several colleagues and I spoke from the Senate well about the importance of taking action on gun safety. The Public Safety Committee, chaired by Senator John Albers, is considering a school safety bill, but it’s disingenuous to talk about school safety without considering common sense gun laws. Until we pass gun reform, we’ll still have tragedies like Parkland. If gun safety is important to you, call both Senator Albers (404) 463-8055 and Lt. Governor Duncan (404-656-5030) and demand hearings on the gun safety bills.

Building Healthy Relationships with the Board of Regents: At a reception this week, I met the Chancellor and members of the Board of Regents that oversees the University System of Georgia. The governor appoints Board members to serve a voluntary seven year term. The Board has 19 members, five of whom are appointed from the state-at-large, and one from each of the state’s 14 congressional districts. The Board then elects its chancellor to lead the body. Building these relationships is important for my work on Higher Education. 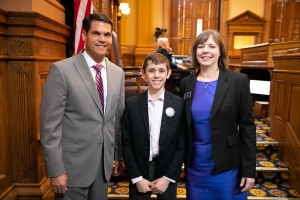 Noah Manning was the first of three young Senate pages from my district this week.

Citizen engagement is critical for a healthy democracy. Be loud. Your involvement can influence which bills get hearings and which bills are left untouched. Spread the word. Call and email Lt. Governor Geoff Duncan, House Speaker David Ralston, and your state representatives. We all need to hear from you, so we can report which issues are important to our constituents. Share your stories. Write letters to the editor in your local papers. Also, all legislative committee meetings are open to the public and if you are able, I encourage you to attend one that may be of interest you.

This coming week will a big opportunity to engage on two other very important issues. Redistricting Reform advocates will be at the Capitol on Tuesday to lobby for a bill to create an independent bipartisan redistricting commission. And on Wednesday, hundreds of concerned parents and students with Moms Demand Action GA will be there to advocate for common sense gun safety, including the Campus Carry Repeal. I plan to be with both groups and I hope to see you there.