The first ten days of the session have been packed with ritual, rule-setting, and resolutions. So far, only a handful of bills have made it through Committee and onto the House and Senate floor for votes. But that’s all about to change this coming week. The official session schedule has been set, with Crossover Day scheduled for March 7th. Crossover Day is the last day for bills to get a floor vote before “crossing over” to the other chamber. That means it’s crunch time. The last day of session, known as Sine Die, is April 2.

Expect the controversy to begin.

That’s where you can play a critical role. Please do not underestimate the power or your own voice! Now is the time to call, email, and/or send postcards. Honestly, getting as few as ten phone messages or postcards about a single issue can put an issue on a legislator’s radar. Now is the time to Be Loud!

Here’s What We’re Working On 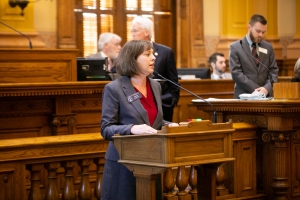 Speaking from well about #RepealCampusCarry

#RepealCampusCarry This week, I experienced two “firsts” when I filed my first Senate bill since returning to the General Assembly, and took my first personal point of privilege to speak from the Senate well (podium) about why we shouldn’t allow guns on college campuses. The bill was assigned to the Public Safety Committee, chaired by Senator John Albers who represents Senate district 56, which primarily covers Sandy Springs, Johns Creek, Alpharetta, Milton, and Roswell in north Fulton County. Senator Albers now holds the power to decide whether or not SB50 will get a public hearing and vote.

Here are three important ways you can help advance this bill:

ERA Needs Your Help:  I was so proud to support the bipartisan bill to make Georgia the 38th state to ratify the ERA. But that bill is now in jeopardy as my colleagues across the aisle have been lobbied by energized and highly organized vocal opposition groups that believe the ERA will allow women to equate male birth control options like vasectomies to abortions and argue that women should have equal access. This week Senator Matt Brass removed his signature from the bill, stating that he can’t take the risk that passing ERA might result in increased abortions. Senator Renee Unterman, the Republican co-sponsor of the bill, has been working hard behind the scenes to make sure that the Republicans who signed the bill hold strong, arguing that being pro-life doesn’t mean you can’t be pro-ERA. But these lawmakers very much need to hear from constituents that support the ERA. Please reach out to thank Senators Kirkpatrick, Albers, Martin, Beach, Jones, and Hufstetler for their courage in signing the bill. You can also call the Lt. Governor’s office at (404) 656-5030 to state your support of the Senate Resolution 66. 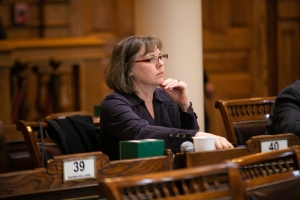 Voting for the DeKalb Ethics Commission

DeKalb Senate Delegation: Under the leadership of chairman Senator Emanuel Jones, the DeKalb Senate Delegation passed two important local bills. The first was to re-establish the DeKalb Ethics Commission, which had been ruled unconstitutional. This new bill fixes that problem and doesn’t require another referendum since it simply revises the law already approved by the voters. Another bill, SB53, addresses an issue that was uncovered when the City of Atlanta annexed a part of DeKalb that had a high tax base, but only a few DeKalb students. DeKalb lost a significant amount of revenue while maintaining the same number of students, which adversely impacts the DeKalb school system. The Senate passed SB53 to prevent this from happening in the future.

College Affordability: In the Higher Education committee meeting, we discussed new ways to make college more affordable, including an income-sharing agreement bill brought forth by Senator Sheikh Rahman. This bill needs more work, but I was pleased Chairman Tippins gave Sen. Rahman, a freshman Democratic Senator, a chance to present his bill. I sit next to Sen. Tippins in the chamber, so I bend his ear a lot about the escalating price of college.

Despite being in session all five days this week, I still found time to visit with people in the district!

— Thank you to Boy Scout Troop #15 for inviting me to visit (my son earned the rank of Life Scout in this troop). The boys and I had a lively discussion about how a bill becomes a law using mandatory recess, a bill that I worked on when I served in the House, as an example. The bill got enthusiastic support from the Scouts! The next day, I was thrilled to welcome the Girl Scouts visiting the Capitol. I led my daughter’s Girl Scout troop for eight years. 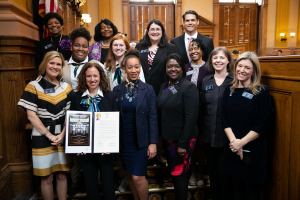 Girl Scouts at the Capitol

— At a new legislator’s breakfast hosted by the Georgia Supreme Court, I was honored to meet Presiding Justice David Nahmias, a Dunwoody constituent who does wonderful work on the Committee on Justice for Children to assess and improve the foster care system, adoption laws, and the juvenile justice system. It was also great to reconnect with Justice Michael Boggs, with whom I served in the House of Representatives.

— I participated on a legislative panel at a breakfast hosted by Healthy Mothers, Healthy Babies where I was Executive Director before my time in the GA House. We discussed maternal and infant mortality in Georgia, the most critical issue facing mothers and babies today. Medicaid expansion, which would put an insurance card in people’s pockets and save troubled rural hospitals, is one obvious solution.

— The Dekalb Democrats invited Senator Elena Parent and me to their February meeting to update them on my Campus Carry repeal bill, SB50, and her Redistricting Reform bill, SR52, that would establish an independent redistricting commission much like California has that would be responsible for drawing district lines in a highly transparent process instead of allowing lawmakers to draw them to their own advantage behind closed doors. Voting rights and gun safety are two areas where Georgia’s Democrats can lead, so I was happy to have time to focus on these issues. 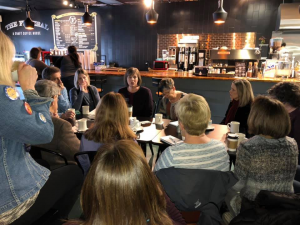 — I held my first in-district Coffee Chat to spend some casual quality time with constituents in Peachtree Corners. We had a very energetic and engaged group who was eager to hear what’s happening at the Capitol and asked lots of great questions. We’ll be hosting a series of these Chats around the district, the next one being at 10 am on February 23rd at the Georgetown Starbucks in Dunwoody. We will soon be announcing other Chats in Chamblee, Brookhaven, and Doraville.

— Sunday evening I’ll spend time with the Dunwoody Homeowners Association to hear more about a Georgia Department of Transportation project at the top end Perimeter that has caused great concern among residents in Dunwoody and Sandy Springs.

As always, my ears are open to you. If you have any questions or concerns, please contact me at my Senate office.