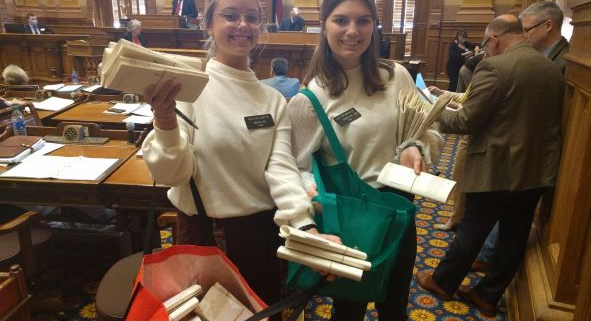 Monday will be Day 16 of Georgia’s 40-day legislative session. This past week, the Capitol hallways started to get a pre-pandemic feel as hundreds of 4H students and Girl Scouts poured in. Honestly, I would like the air to be a bit fresher before the crowds arrive, but the world is ready for normal, so here it comes! It did make me feel happy seeing those kids.

Georgia Tech’s COVID testing program at the Capitol is diagnosing fewer positives, but the virus is still circulating. These days if you see a Republican in a KN95 mask, it probably means they have COVID. Otherwise, they wouldn’t be wearing a mask at all!

Stop the Clock — Ethics Has Been Canceled!

Monday morning was supposed to start bright and early at 8am with an Ethics Committee meeting, but at the last minute it was canceled. Since the Ethics Committee considers all the bad voting bills, my administrative assistant Keridan always knows she’ll get a big smile from me when she tells me “Ethics” has been canceled.

When candidates “qualify” to have their name on the ballot, they pay a qualifying fee. This money goes to the local political party. Hence, if these races are all non-partisan — no qualifying fees to fund the local party!

These emails also argued that the state should stay out of county government affairs and that local control was “a strong Republican value.” How ironic to receive these emails while my Republican colleagues are actively usurping local control through the redistricting process in several metro-area counties. Ethics has been canceled in more ways than one in the Georgia legislature.

After getting 30 minutes of extra sleep, my week launched with an 8:30am Zoom meeting to evaluate six different county commission maps for Fulton County. These represented the local desires of individual Republicans and Democrats, and sometimes compromises between a Democrat and a Republican!

Local redistricting work is still dominating much of our time. A decade ago, Senate district 40 was purposely drawn to give my Republican predecessor a vote in three county delegations. That means I’m juggling Gwinnett, Fulton, and Dekalb county commission and school board redistricting efforts and all three have had their challenges. Yet some of my rural colleagues can have up to ten counties to support as the lone legislator. It’s a lot of work for a part time citizen legislature to pass county commission and school board redistricting maps for Georgia’s 159 counties.

Toward the end of the week, our local consent calendar — the list of local bills making their way through the process — was ten pages long, which translates to very long floor sessions. It leaves little time for regular work like constituent services, working on legislation, and working the budget process. It’s times like these that I could really use a staff of 20 like our members of Congress have.

Speaking of maps, your over-achieving DeKalb delegation is making more work for itself, and could end up passing two different County Commission maps. One would be a map that simply rebalances the populations of each district. The other would be a map that sets up a referendum to switch to seven equal sized commission districts (rather than five districts plus two super-districts we have now).

Last week I told you the latter map was off the table due to the referendum requirement that I didn’t think we had time for. Turns out, we could do both.

If this bill passes, the referendum would be this coming November, and if the referendum (vote by the people) passes, the map wouldn’t go into effect until 2023 or possibly 2024. That means we must also pass the first map that rebalances populations in the current structure.

Throughout Black History Month, Georgia Senators often use their points of personal privilege to highlight black historical events and figures. On Thursday, Senator Nan Orrock told the story of Henry McNeal Turner, who became the first black pastor and a leader in the US Colored Troops during the Civil War. After the war, Turner settled in Macon, Georgia and in 1868 was among 33 new black legislators elected to the Georgia General Assembly for the first time following 250 years of slavery.

These black legislators helped write Georgia’s new Constitution guaranteeing voting rights for former slaves. But just two months after the 14th Amendment that granted African Americans US citizenship and civil rights was adopted, Georgia Democrats, then the party of white supremacy, decided that while black people had the right to vote, they did not have the right to hold office. They introduced a bill to expel all the black legislators.

Turner’s speech in the House of Representatives in opposition became famous and was used as a rallying cry for the Civil Rights Movement. Turner argued, “The great question, sir, is this: Am I a man? If I am such, I claim the rights of a man. Am I not a man because I happen to be of a darker hue than honorable gentlemen around me? I want to convince the House today that I am entitled to my seat here.” Despite Turner’s speech, the white legislators chose to ignore the voices of 800,000 black citizens who had registered to vote during Reconstruction and voted to expel all 33 black lawmakers.

Almost 154 years later, it is heartbreaking to witness a similar silencing of black leaders and voters, this time by white Republicans. This week, Senate Republicans threw out a Gwinnett county commission map drawn and approved by the Gwinnett delegation and county commission, a majority of whom are black, with significant community input from Gwinnett’s diverse electorate. Instead, they approved a map drawn by just two white Gwinnett House Representatives with no input or approval of the Gwinnett delegation, local elected leaders, or the community.

The same dynamic played out with the Augusta/Richmond County local redistricting process. A set of maps, drawn and approved by a majority black county commission and school board with input from the community, were disregarded in favor of a map that dilutes the voices of black voters drawn by a few white Republicans. Senator Harold Jones’ fiery speech in opposition to these unvetted maps, his anger and frustration palpable, was reminiscent of Turner’s famous speech.

“Whether the map is perfect or not, it went through the process. It’s a democratic process. At some point in time, we have to start respecting African American elected officials. And when they do the process and say that we’re going to respect it, that’s what we’re going to do. This was a total disrespect of it,” said Senator Jones.

Putting in the Time & Effort

In contrast, Republican bills seem to make it to committee without much due diligence. SB 435, a bill to prohibit transgender students born one gender to participate in sports teams “of the opposite gender,” was originally written to only exclude transgender girls (born male) from playing on girls teams. But in the Education Committee, discussion arose about this being unconstitutional under Title IX. So the author changed the bill on the fly to prohibit ANY student born one gender from participating on teams of the opposite gender. The unintended consequence is that this bill will now prohibit all girls from playing on boys teams, like those who serve as kickers on boys football teams.

Another bill to ban “divisive topics” about race demonstrated how damaging vague and subjective bill language can be. Democrats asked questions that highlighted the confusing and contradictory bill’s language. What is the standard for deciding what is a “divisive topic?” Who decides? How would a teacher discuss systemic racism like redlining and how it affects people of color today? Ultimately, without clear understanding of what constitutes a “divisive topic,” it will create a flood of complaints from parents who can object to any topic on race and will leave teachers and administrators reluctant to discuss race for fear of retaliation — which is probably the intent.

Having been on the “bad voting bills” committee in years past for bad voting bills, I now feel for my colleagues on the Education and Youth Committee.

“I suppose it’s like the ticking crocodile, isn’t it?”

Georgia Republicans are the Captain Hooks of our time. They see that change is on the horizon and they fear their vanishing order. They are lashing out and the crocodile persistently reminds them they are running out of time.

If you feel angry about their sloppy bills targeting trans kids and how history is taught, below are some legislators you can call or email. In the meantime, remember that it’s time to get moving on election season. A new Democratic Governor would be able to stop these bills in their tracks. Sign up to volunteer with your county Democratic Party and support your local candidates!