A Little Inside Baseball: The Georgia Budget

The sole constitutional requirement of the Georgia legislature is to pass a balanced, annual budget. This translates into two bills, both of which must originate in the State House. The “little budget” amends and updates the current fiscal year budget that ends June 30, 2022. The “big” 2023 budget funds the government for next year, beginning July 1, 2022. The budget process doesn’t draw many spectators from the public, but it is the single-most important thing we do.

“Budget Week,” traditionally begins right after the MLK holiday and lasts for three days during which the Governor, the State Economist, and all State Department Heads present their budgets to the House and Senate Appropriations Committees. These hearings offer important insight into how each department works, or doesn’t, for our state.

After running down to the Capitol on Tuesday to take my COVID test which was thankfully negative after last week’s exposure, I watched the hearings from home to avoid Omicron which was starting to spread among the administrative staff, including my own assistant, Keridan. Thankfully Keridan has remained symptom-free and will return to the office this week.

A Great Day to Play Ball

The Governor’s budget is based on revenue estimates established by our state economist. During his presentation, Governor Kemp joked that while we always estimate conservatively, we’ve never been this conservative. Last year, thanks to a booming economy and federal pandemic relief, our state economist underestimated our state revenue by $4 billion. Normally, there’s not much discretionary funding after mandatory spending on schools, Medicaid, etc. This year, we have an unprecedented $4 billion fund — every Governor’s dream.

The report from State Economist Dr. Jeffrey Dorfman was equally optimistic. He believes the odds of a recession are very low, but there will be some economic slowing as our economy returns to a more normal pace. Pandemic disruptions like labor shortages, supply chain issues, and inflation should normalize over the next year.

Behind in the Count: The Governor’s Proposal

The Governor’s proposed budget offered lots of seemingly good news with state employee pay raises, increased education and public safety spending, and long overdue cost of living increases for state retirees. But much of it simply makes up for decades of deep Republican austerity and budget cuts. During his first years in office, the Governor slashed the budget by 10% and even with record revenues this year he told department heads to keep their budgets flat. The Governor proudly announced that Georgia has fewer state employees now than in 2008, yet department heads revealed how shortage of staff has taken a heavy toll on their ability to serve Georgians.

While there was a collective sigh of relief for having more revenue, many state agency heads were candid about their challenges attracting and retaining good employees due to low employee pay. Agriculture Commissioner Gary Black told a story about a strong, well-trained 4-year employee who left Georgia to take the same job in Iowa for almost double the pay. GBI Director Vic Reynolds spoke at length about his struggle to attract and retain Medical Examiners for the state. Even with a $5,000 pay increase, Georgia will have a hard time attracting employees in a competitive labor market.

COVID related shifts and disruptions were evident in several presentations. Secretary of State Brad Raffensperger reported record increases in corporation filings and professional license applications, demonstrating how Georgians are re-evaluating and shifting career paths. Our judicial system is struggling to dig out of COVID-related disruptions and backlogs. Presiding Justice Michael Boggs gave one example of a metro court circuit that never had more than 400 state court cases pending prior to the pandemic. As of November 2021, it had more than 1,800 pending — a 450% increase. The GBI has similar increases in crime lab backlogs and autopsy demands.

Economic Development Commissioner Pat Wilson reported interesting shifts in tourism. While our metro-based tourism and convention business suffered, destinations outside of Atlanta, like our state parks, Helen, and coastal Georgia had some of their best years during the pandemic. There is hope that this trend will continue. Once tourists experience one terrific destination, they’re more likely to try another, bringing an economic boost to our smaller cities and counties.

Technology is a double-edged sword in government. Until the pandemic, being “in the room” during budget hearings was an important way to signal to the Appropriations Chairs that you’re paying attention and engaged. Technology served that purpose for me this year as I watched remotely and texted some questions directly to Senate Appropriations Chair Blake Tillery during the hearings. Unfortunately, lobbyists and other luminaries often have that same direct line to elected officials during committee meetings, giving them unfair access that the general public does not get.

Questions posed at the hearings by some Republican Committee members hinted at the controversial issues we’ll be battling this session. Education Superintendent Richard Woods, Acting University Chancellor Teresa MacCartney, and Technical College Commissioner Greg Dozier all fielded pointed questions about our education curriculum. One Republican legislator asked, “Can you confirm that the state doesn’t use taxpayer dollars to encourage teachers or their children to be taught that certain characteristics inherently designate them as being privileged or oppressed?” Superintendent Woods explained new transparency rules passed by the State Education Board that will require local school systems to post information on curriculum, student records, and district budgets on a soon to be developed dashboard. Commissioner Dozier replied, “I’ve never been asked that question before!”

Timing and Teamwork for the Win

During her presentation, Acting University Chancellor Theresa MacCartney gave Senate Higher Education Chairman Tippins and me a wonderful shout out for our work together on my University Fees Study Committee. Our committee report ultimately recommended that the Special Institutional Fee, a temporary fee to make up for lost government funding during the Great Recession, be eliminated. A member of the Office of Planning and Budget had attended our meetings and brought the recommendation back to the Governor for consideration, and funding to eliminate the fee was included in the Governor’s proposed budget.

When I saw Governor Kemp at a Martin Luther King event last week, I thanked him for including our recommendation in his budget and he said, “I’m tired of paying it!”  It’s often the personal pain points of people in power that help move the needle on certain issues.

Planning Our Next Play

Budget week provides those of us not on the appropriations committees with some time to do some early session planning. I met with fellow Working Families and Women’s Legislative Caucus leaders to outline our agendas. The Gwinnett delegation met to continue our redistricting work for county commission and school districts. At this time, there are no plans to change the number of districts and we are cautiously optimistic this will hold. But we must be prepared for anything given prior attempts by Gwinnett Republicans to take these efforts out of the delegation’s hands.

I also met with disability community advocates and staff from Georgia Council on Developmental Disabilities to develop a multi-pronged strategy to tackle the most disappointing part of Governor Kemp’s proposed budget. The number of Medicaid waivers offered to people with developmental disabilities each year remains unchanged. In a strong budget year, we have a moral obligation to help these families that carry enormous financial and emotional burdens. This is the year to take substantial steps toward eliminating the decades-long waiting list for these families.

This week, we’ll be back in regular session while more detailed budget hearings continue in House appropriations subcommittee meetings. 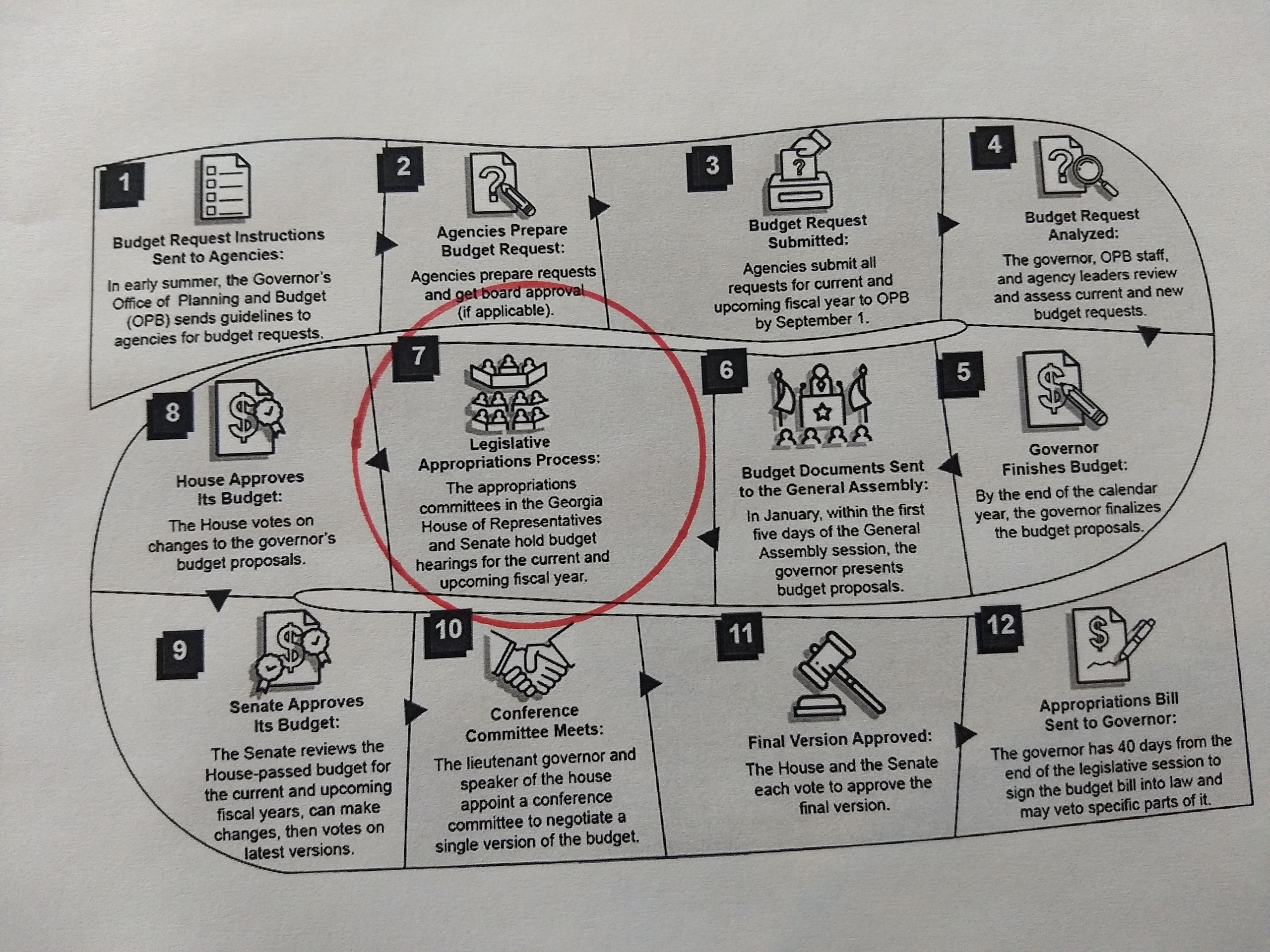