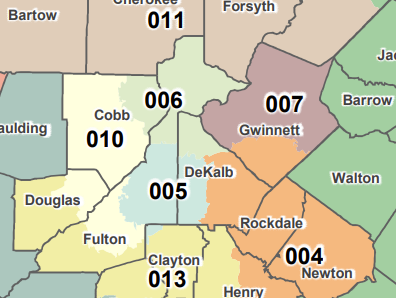 Only the Governor can call a Special Session and set its agenda, and the Governor has chosen to keep the agenda narrow —  1) to redraw Georgia’s districts for seats in the U.S. House of Representatives; 2) to redraw Georgia’s state House and Senate districts; 3) to possibly adjust the motor fuel tax to align with federal tax changes; 4) to possibly consider limited local legislation and 5) to confirm executive appointments to various boards.

A huge thank you goes out to many of you who sent contributions to my re-election campaign since my last email! Once the special session begins, Georgia law prevents me from accepting donations. If you would like to contribute, please click on this link to donate online or locate instructions for sending a check. Please make sure donations are made and checks are postmarked by Nov. 2nd. Off-year fundraising is an important part of our campaign strategy.

Sadly, the U.S. Supreme Court has said maps can be drawn to protect partisan advantage, so expect the maps to favor Republicans, who are of course in the majority. But the legislative process should still allow for public scrutiny. So far the Republican majority is not off to a good start, as no Georgia state House and Senate maps have been released in preparation for the likely very short special session. Once the redistricting bills are filed next week, I expect things will move very quickly through legislative committees and to floor votes, each step closing off opportunities for public input.

On the other hand, my Democratic Senate colleagues and I have been hard at work listening to voters at community forums, and drawing maps that reflect ALL Georgia voters. Georgia is a 50/50 state both politically and demographically, and the maps should reflect this. Our maps, released to the public, do just that.

Currently, Georgia has 14 seats in the U.S. House. Six are held by Democrats; eight by Republicans. In a map proposed by the Senate Republicans and the Lt. Governor, Democrats would lose one seat, giving Republicans 64% of the congressional seats — in a 50/50 state, that’s a partisan gerrymander. I feel confident, however, this will not be the final map — they could try to go even further.

Georgia Senate Map: The State Senate consists of 56 seats. Currently, Democrats hold 22 of those seats, and 18 of the 22 are held by people-of-color. The proposed Senate Democratic Caucus map contains 22 districts in which minorities are a majority of the voting age population. This reflects the shift in demographics that has occurred during the last ten years.

These maps matter because they will affect people in the voting booth, and in the everyday lives of Georgians. The Senate Democratic Caucus maps allow more voices to be heard — voices that have been consistently silenced throughout Georgia’s history. It’s time that history be reversed.

Many of us have grieved the loss of loved ones during the past couple of years. This includes our campaign, as we have recently lost two beloved voting- rights warriors and campaign volunteers: Deborah Anne Gaventa Brown and Jonathan Grant.

Deborah died peacefully and unexpectedly in her sleep last July shortly after returning home from visiting old college friends in the northeast. She leaves behind three adult children in their twenties, who are now living together in Deborah’s home. Right now, all three children are enjoying a trip to the Caribbean, a family trip Deborah was planning when she died. Deborah’s unique gift was to lovingly encourage anyone, now matter their political beliefs, to leave behind politics of hate and judgement. She didn’t think anyone was a lost cause.

Jonathan Grant died suddenly due to a traumatic head injury when he fell from a ladder. He leaves behind his two grown children and his wife Judy, who chaired my fundraising committee during my first campaign and term. Jonathan can be credited with bringing reform to the DeKalb Elections Board. He was a talented writer and kept us all informed. As several people said at his memorial service, Jonathan always “showed up.” Democracy is safer in DeKalb because of Jonathan’s efforts.

These two warriors are already missed, both for their friendships and their advocacy. Let us carry on in their memory.

Under Cover of the World Series
Scroll to top