Join Georgia State Senator Sally Harrell and State House Representatives in Senate District 40 for an update on the 2021 legislative session and the upcoming special redistricting session later this year.

Join by Zoom or via Facebook livestream. We’ll be collecting questions in advance, and fielding questions via both platforms as time permits.

Zoom details will be emailed to registrants.

With the 2021 legislative session barely behind me, and two shots in the arm, I wasted no time getting to my hometown to see my mother and sisters. I know many of you have experienced such reunions, or are about to once you’re two weeks past that second shot. Enjoy!

Georgia Voting Law Podcast: While in my hometown of Indianapolis, I met up with an old high school classmate who invited me to discuss Georgia’s new election law on his podcast. His leading question was, “is it racist, or not?” To which I replied, “It is, and it isn’t – both.” Here’s a link to the podcast if you’d like to take an in depth look at the actual content of Senate Bill 202.

Sadly, after I got home I heard the news of yet another mass shooting — this time in my hometown. My heart aches for the families who have lost loved ones. Though causes of these mass shootings are complex, here are a couple of things I am doing to help.

Firearm Safety Legislation: Toward the end of the legislative session, I drafted two pieces of legislation. A “Do Not Sell” bill that allows people to voluntarily place their names in a “Do Not Sell” Georgia firearm database. This allows people who know they have cyclical mental health issues that could result in harm to self or others, to choose to register so that they cannot purchase a gun while having an episode. Second, I drafted a bill that requires training before obtaining a permit to carry a firearm. I look forward to working on these two bills next session.

One of the best things about being a State Senator is using my voice to amplify the voices of others. During the last week of session, I held a press conference for people who live with intellectual and developmental disabilities.

In 1999 the U.S. Supreme Court, in a case that originated in Georgia, ruled that the unjustified segregation of people with disabilities is a form of unlawful discrimination under the Americans with Disabilities Act. Institutions were closed and Medicaid Waivers were made available so people could establish homes in their communities. Sadly, Georgia currently has a waiting list of 7000 people waiting for these slots, and is funding only about 100 slots per year.

Following the lead of the Georgia Department of Behavioral Health and Developmental Disabilities (DBHDD), our press conference asked that this waiting list be funded and therefore eliminated during the next five years. During the interim between sessions, several of us plan to meet with the Governor to ask him to fund these slots in his proposed 2022 – 2023 budget. As the Senior Minister at North Atlanta Church of Christ, Don McLaughlin, said at the press conference, “We need to do this not because it makes economic sense, because it makes moral sense.”

Clearing my Head of Toxic Politics

On the way home from Indianapolis I joined my husband Jay and some fully vaccinated friends in Kentucky’s Red River Gorge for some rock climbing. While depending on a rope and your belayer to hold you up, and looking for small bumps and crevices in the rock to use as foot and hand holds so you can get to the top, it’s hard to think about anything else!

Here are the top ten things climbing teaches me about surviving in politics:

1) If what you’re doing isn’t working, look for alternatives.

2) Look up to see what is coming next and plan accordingly.

3) Rest when you have the opportunity.

4) Climb on, even when you feel stuck.

5) Keep your feet grounded firmly below you.

6) Stand up tall, even when you think you can’t.

8) Lean in to balance yourself.

9) Have plenty of support that you can trust to hold you up. 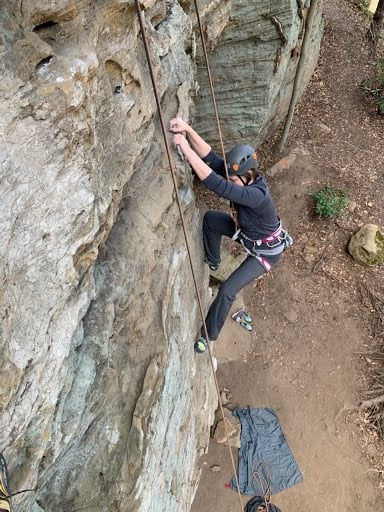 The For The People Act Comes to Atlanta
Scroll to top