Sally’s Legislative Town Hall: Save the date! Please join me and Georgia House Representatives whose districts overlap Senate 40 for a virtual legislative town hall on Thursday, February 18th at 7:00 pm.

The Zoom link will be emailed to all registered participants prior to the event. We will also livestream the event on my public Facebook page Sally Harrell Senate District 40.

Vaccines UP — Cases DOWN

Cases on the Decline: COVID positive cases are currently decreasing throughout most of Georgia. The same is true in the Senate — we had zero positive test results this week! This news seems to have settled the question about whether or not the session should continue. We now have a schedule that takes us through the end of this month, to legislative day 25 (out of 40).

Vaccinating Teachers: I want to thank those who responded to my last Snapshot and offered thoughtful suggestions for ways we could start to vaccinate teachers while we wait for more vaccines to cover our 65+ population. Several supporters proposed systems for alerting nearby school Principals when there are no-shows so that we can start to vaccinate our most at-risk teachers and school personnel. I plan to summarize and share your ideas in a letter to the Department of Public Health.

When will “1-B” Begin? Many of you have asked when Georgia will move on to phase “1-B” (critical infrastructure and essential workers). Most of us realize why we must wait our turn, but waiting is very hard when you have no idea how long the wait will be. Our Department of Public Health needs to be more forthcoming about the current status and future plans. This week, according to the best data available to the public, the number of vaccines administered increased 21% over last week (now approx. 283,000/week), and the number of vaccine doses shipped by the Federal government increased 22% (to approx. 282,000/week). 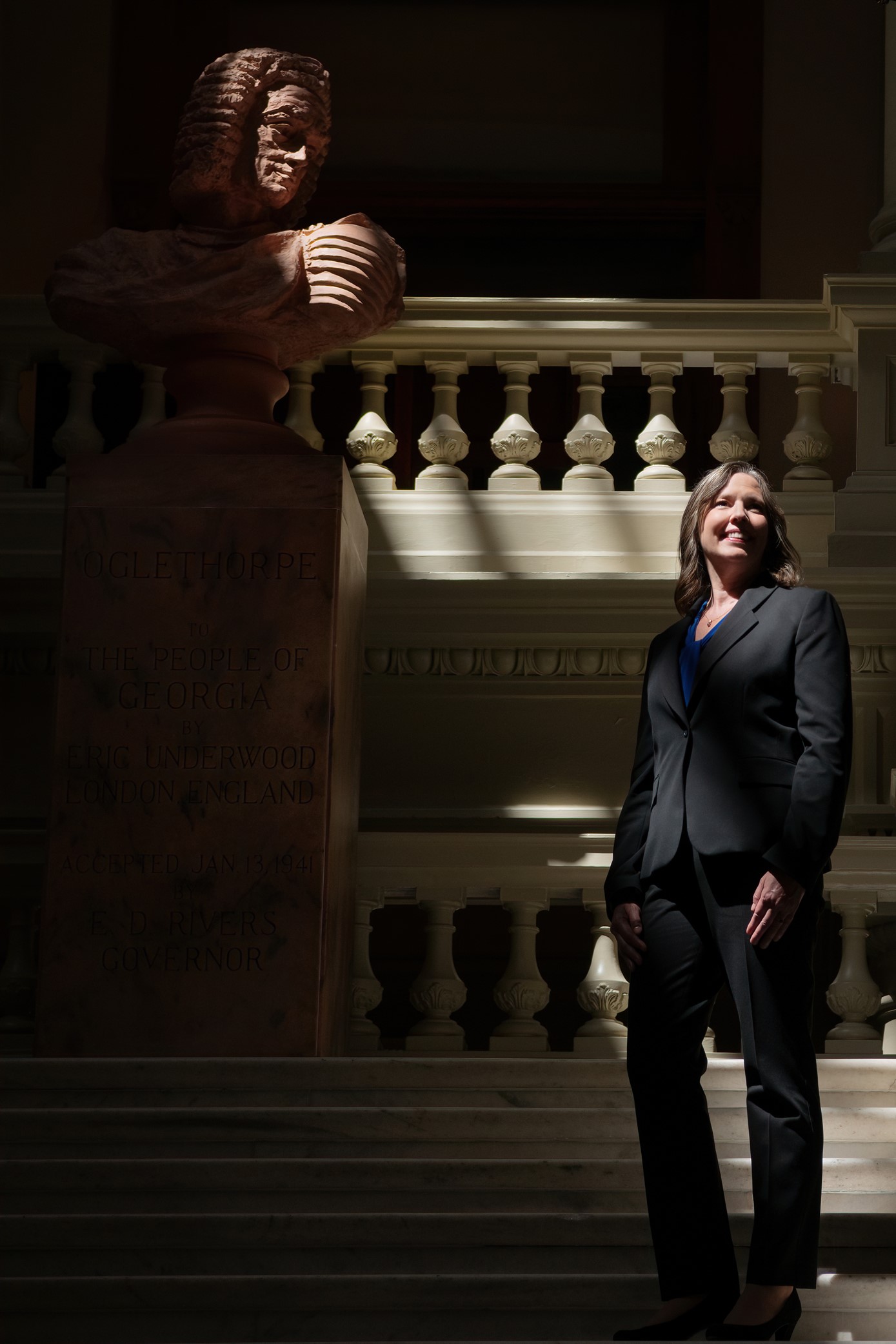 The most germ-free route from my office to the Senate Chamber is up the north stairs, where every morning I pause to say a silent “good morning” to General James Oglethorpe, whose statue rests on the landing between the second and third floors. As a young man in England, James Oglethorpe was a prison reformer, exposing overcrowded and abusive prison conditions where many were jailed for being unable to pay their debts. To give these debtors a second chance, Oglethorpe proposed to King George that he send these prisoners to America, giving them a second chance through a business venture to produce silk — farming mulberry trees, the sole food of silk worms. This month marks the 288th year since the establishment of the Colony of Georgia.

Oglethorpe was a progressive social reformer and activist. His vision for Georgia was to create an egalitarian economy completely free of slave labor. He allowed Jewish refugees to settle in Georgia after they had been rejected elsewhere and he worked respectfully with Native Americans to purchase land and negotiate treaties.

Sadly, Gen. Oglethorpe’s progressive policies did not endure. The colonists eventually argued their way into repealing the ban on slavery, saying they could not compete with the economy of neighboring Chartleston, South Carolina. But I believe that Georgians, as part of our unfolding story, are continually called back to our founding. Perhaps it’s not coincidence that Georgia became the center of the Civil Rights Movement, that we’ve recently led our country on some issues of Criminal Justice Reform, and that we just sent a Black man and a Jewish man to represent us in the US Senate.

Georgia needs to call on Gen. Oglethorpe for inspiration today, as our state corrections facilities are at a crisis point with massive staffing shortages and increased murders and suicides among inmates. I’ve heard from several constituents that this issue is affecting loved ones that work in the system or are incarcerated. The mid-year budget includes a pay raise for our state corrections officers, but we have to do much more.

To address this issue, I sent a letter to the Chair of the State Institutions and Property Committee, Senator Ed Harbison, requesting that we hold a public hearing on the current conditions of our prisons to see what we might do to help. Senator Harbison agreed and we’re now in the process of scheduling the hearing. Stay tuned for more on this issue.

Education: The Antidote to Incarceration

The best way to prevent incarceration is to ensure a free, quality education for every child. One of the main reasons I ran for office was to advance “whole child” education. Our education system is so focused on academics that we’ve forgotten about kids’ psychosocial and developmental needs. Research is clear that when we address the whole child, kids learn better.

This week, I filed three bills to improve the physical, developmental, mental health, and safety of Georgia’s students:

School Recess: Senate Bill 122 requires local school boards to schedule at least 30 minutes of unstructured recess time daily for first through eighth grade students. I’ve worked for decades now on making sure every child gets a daily recess. You may recall that Governor Kemp vetoed a recess bill last term, but I’m not giving up. The pandemic has robbed our kids of critical free play time with their peers. Requiring recess is as basic and fundamental as requiring lunch. I plan to reach out to discuss this with the Governor directly as the bill moves forward.

Young Children & Graded Homework: Senate Bill 110 gives Georgia’s kindergarten through second graders and their families more freedom during family time by prohibiting graded homework. It also levels the field for kids who don’t have parents who can help them get the homework done.

Permanent Classroom Act: Overcrowding has plagued the schools in our district and around metro Atlanta for decades, which has made it so hard to safely send kids and teachers back into schools during the pandemic. I’ve spoken to many parents about this well before the pandemic, and this bill includes their suggestions.

Senate Bill 123 directs the State School Board to establish better safety standards for mobile classroom units, including maximum useful life, minimum fire exits and windows, proximity to water sources to extinguish fire, and safe pathways to and from school buildings. The bill requires school districts to develop a plan to retire mobile units and move students into permanent classrooms within five years. It requires school districts to collect and report data on square footage of each school per student to better understand school overcrowding, improve facility planning, prevent disease spread, and improve the general school climate for our students.

Bills on the Senate Floor

The Amended Budget and Bonuses for State Workers: The Senate finalized the “small” mid-year adjusted 2020/21 budget by passing an amended version with a last minute addition of $1,000 bonuses for more than 57,000 state employees who make less than $80,000 a year, thanks to federal funds that have offset state funding. These bonuses acknowledge the extraordinary efforts of our public health workers, Department of Labor employees, law enforcement officers, and many others during the pandemic. Senate Minority Leader Gloria Butler reminded us that so many Georgians are still struggling. “We could and should have done more,” she said.

Protecting our Very Vulnerable: The Senate passed several bills this week to protect some of our most vulnerable citizens, including a bill to prevent patient brokering — a kickback scheme whereby drug abuse treatment centers pay third parties to procure patients for them. Sadly, this practice preys on people in desperate need of help and sometimes deliberately sets them up to relapse so they can return to treatment centers to increase profits. We also passed two bills to protect human trafficking victims stemming from First Lady Marty Kemp’s GRACE Commission — one that allows human trafficking victims to change their names without having to publish it in the newspaper as the state currently requires, and the other to allow victims to sue their perpetrators.

Time to “Be LOUD” on Voting

State Voting Bills (the bad ones): The GOP’s voter suppression bills are starting to make their way through the legislature. There are 20 voting bills currently assigned to the Senate Ethics Committee so we’ve been divided into subcommittees. I will serve on Subcommittee A, and next week, we’ll consider SB 67, a bill that requires photocopies of ID along with absentee ballots, and SB 71, that will eliminate absentee voting for the vast majority of voters. The sub-committee has been set for Tuesday, Feb. 16th, 7am (room 307 “CLOB” Coverdell Legislative Office Building)

Federal Voting Bills (the good ones): While we deliberate these state measures, there are federal measures awaiting action in Congress that could mitigate their effects. For example, the John Lewis Voting Rights Act would restore the protections of the 1965 Voting Rights Act that prohibited states from enacting discriminatory voting measures. The We the People Act, or HR 1, expands voting rights by requiring same-day voter registration for federal elections, permitting voters to make changes to their registration at the polls, requiring 15-day early voting periods, and establishing automatic voter registration.

So like James Oglethorpe and John Lewis, we need to make some good trouble and “Be LOUD” at both the state and federal levels. Call, email, and send postcards to your state representatives, members of the Senate Ethics Committee, and your Members of Congress. Tell our state legislators that you oppose any bill that limits voters’ ability to vote, and urge your members of Congress to advance HR 1, The John Lewis Voting Rights Act, and all other legislation that expands and protects voting rights as soon as they can.