Finding Normal in the Sea of Anomaly

As I arrived at the Capitol Monday morning for the start of the 156th Georgia General Assembly, I felt a little like Nemo trying to find his way through the sea anemone. I admit I was scared. It’s not the first time I felt scared at the Capitol, so I told myself I knew I could push through it — like the time in the early 2000s when in order to get to my office I had to push a baby stroller through a swarm of angry men waving 1956 Confederate flags.

As the week progressed, I realized the only way to govern through scary times is to look for the “normal.” Experiencing the rites and rituals of the legislative process, and dealing with the necessary mundane business of organizing, gave me the stable ground I needed to calm my nerves.

Many of you have reached out to express your concern for my safety and health. Your concern has sustained me. And, you’ll be pleased to know that the legislature will not be in session next week. It is a longstanding tradition that following the MLK holiday, we recess for budget hearings, and I will watch those budget hearings from the safety of my own home. Security at the Capitol has been ramping up all week, though I must say, it is very disconcerting to see State Troopers all decked out in military garb and holding M4s. Sadly, it is necessary.

Georgia’s Vaccine Rollout is having a Whale of a Time

There is no doubt Georgia is having a difficult time rolling out vaccines and that people are very frustrated. The hope we felt when we first heard of the vaccines has unfortunately turned to frustration at the difficulty of getting it into people’s arms. Like everything else about this pandemic, the Trump administration has punted the vaccine deployment to the states, and Georgia is relying on a public health infrastructure that has been severely underfunded for decades. As recently as January of 2020, during good economic times, Governor Kemp asked public health to make draconian cuts to their budgets. Even Republican legislators thought this was a shortsighted move.

That being said, help is on the way and I am confident the situation will improve. There’s talk of a centralized, statewide registration system being developed and many commercial entities such as grocery and drug stores are signing up to be providers. There’s also a massive effort to recruit volunteers, including healthcare and non-clinical volunteer positions. If you are interested, please apply through Georgia Responds (https://dph.georgia.gov/georgia-responds).

Out to Sea: The First Legislative Week 2021

At my first freshman legislative training, a veteran legislator said travelling to the Capitol for the legislative session felt a little like being on a ship out at sea.

I personally think it would have been more responsible to postpone Georgia’s legislative session until things settle down from the election, and vaccines are rolling out more smoothly. By Georgia’s constitution, we must begin the second Monday of January, but we could have all been sworn in, then gone back home. The General Assembly is the perfect superspreader event. We bring people to Atlanta from every corner of the state, put them together in two big rooms, then send them back out. And we do this every week for about three months. The Governor, public health, GEMA and the National Guard don’t need the distraction of the legislature right now. That being said, the legislature is taking the virus much more seriously now than they have in the past.

COVID Testing: My first trip back to the Capitol since June began the week before session, as I went for my first COVID test. Many years ago I learned from Speaker Tom Murphy that the legislative desks in the chamber used to all have spittoons so legislators could spit their tobacco. Now legislators are spitting into plastic specimen cups!

Last fall, I learned about Georgia Tech’s very effective COVID surveillance testing through my own Tech student’s experience. I was so impressed, I called Georgia Tech to suggest they offer the same service to the General Assembly. I’m thrilled to report that Georgia Tech is now on-site at the Capitol doing mandatory testing for all staff and members twice a week. Four Senators (out of 56)  have already tested positive, including the Majority Leader.

This is the kind of testing program that should be provided to every K-12 public school in the state, so that teachers are safe, and kids can return to the face-to-face learning and the socialization that they so desperately need. 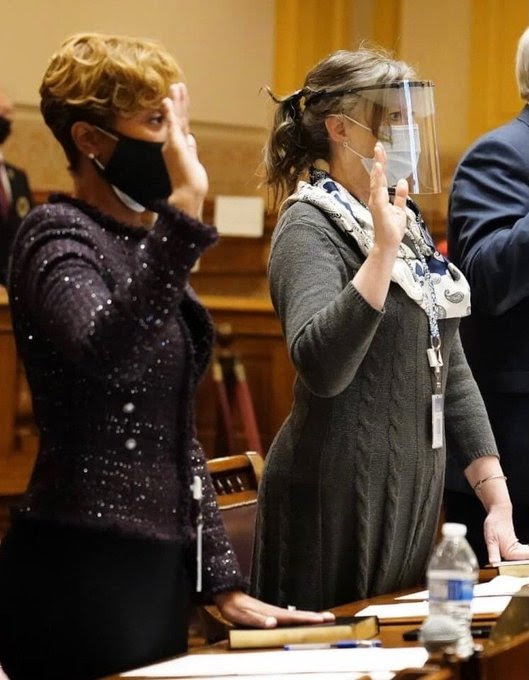 Swearing-In: Following Monday morning COVID testing (which almost half the House skipped), members of the Senate were sworn-in by Georgia Supreme Court Justice Charlie Bethel. For me, taking the oath is always highly emotional. Two years ago, fresh on the heels of winning a very intense campaign, I could hardly get the words out. I did much better this time. This year I chose to place my left hand on the Constitution of the State of Georgia, since in the oath I promise to “support the Constitution of the state and of the United States.”

Rules & Preachers: This year’s Senate Rules passed easily and without controversy. Instead of the volatile changes we saw last term, we approved some minor rule adjustments to allow for flexibility due to COVID safety. Though guests are not allowed this year in the Senate chamber, we still have our Chaplain of the Day. As I’ve said before, I enjoy a moment of quiet reflection in the morning, and many of the preachers do a good job of offering thoughtful and appropriate words. But too often that is not the case.  Monday was the first time I needed earplugs. The Preacher of the Day spoke of love, but yelled it so loud it hurt! Wednesday’s preacher was a bit rattled because he had a car accident that morning with the Preacher of the Day scheduled to address the House!

Committee Assignments: This year, I hoped to be placed on either Health & Human Services or Appropriations. I did not get either of these committees, and instead was placed on Retirement. I will continue to serve on Ethics, Higher Education, Natural Resources & the Environment, and State Institutions and Property. You might have heard that three prominent Republicans were stripped of their Committee chairmanships ostensibly due to their participation in promoting voting conspiracy myths. Ironically, these three legislators are ones I found reasonable to work with last term. Only three Senate committee chairs this term are women, out of 26 committees, and these three committees are relatively minor committees that don’t receive many bills.

The Big Fish: Governor Kemp’s State of the State

On Thursday, Governor Kemp gave his State-of-the-State address to a Joint Session of the House and Senate. In order to properly distance, only three members of the Senate sat in the House chamber, while the rest of us watched through video streaming in our offices. The State-of-the State address tends to establish the “tone” of the legislative session, since Georgia’s government is structured so the Governor is the “big fish” with the resources available to push through a strong agenda. The Governor’s 2021 – 2022 budget was released to legislators following the address, and next week we will focus on presentations from the executive branch on proposed departmental budgets. The state fiscal year runs from July 1 – June 30.

Here are some highlights from the Governors address:

Many of the decisions about who gets what in the Senate are based on seniority. Last year I ranked 53rd out of 56. Now I rank 42nd. This earned me an office inside the Capitol (110-D), which will make it easier to get around, rather than having to trudge across the street to the Legislative Office Building.

I’m thrilled that the same team that served me so well last year will be in place once again.

Amy Swygert, Communications Director: I’m thrilled that Amy will be continuing as my Communications Director. Amy has three decades of communications experience that she’ll be using to keep all of you informed and to help amplify my work. Amy serves as my chief aide and helps me with my legislative agenda and other duties. You can reach her at amy@sallyharrell.org.

Laurie Lanning, Political Director: Laurie, who has been a devoted volunteer since the beginning of my campaign, will again serve as my Political Director. In this role, she keeps her ear to the ground and monitors which issues we’re hearing most about from you. You can reach Laurie at laurie@sallyharrell.org.

Jay Harrell, Operations and Strategic Advisor: Jay keeps the wheels turning and the train on the track.  jay@sallyharrell.org

Administrative Assistant, Keridan Ogletree: Keridan will continue as Administrative Assistant to both me and Senator David Lucas, with whom I now share an office suite in the Capitol building. Keridan is a Georgia native and Georgia State political science graduate. I owe so much to Keridan who has been on the front lines answering phone calls, keeping my meeting schedule updated, and helping to address constituent needs. You can reach her at (404) 463-2260 or Keridan.Ogletree@senate.ga.gov.

I always love seeing constituents at the Capitol, but during the pandemic, for the safety of members and staff alike, certain operations like the rope lines, the Senate page program, and access to the Senate gallery have been suspended. I invite you to watch our chamber sessions and committee meetings online. Here’s a great guide for how to tune in. Also, Georgia Public Broadcasting’s show “Lawmakers” is very informative.

Please look for my next Snapshot, where I will highlight pieces of my own legislative platform, as well as the legislative agenda for the Senate Democratic Caucus.