Last week, Governor Kemp stood before the steps in Georgia’s capitol, with Trump’s CMS appointee Seema Verma by his side, to announce the federal government’s approval of his Medicaid Waiver Plan.

The Governor’s slickly worded presentation almost had me believing that he could cure Georgia of its 1.4 million uninsured. He spun a pretty good tale of how “millions and millions” of additional Georgians would benefit from lower health insurance premiums as a result of his plan. But the small print revealed he was selling us snake oil instead.

Gov. Kemp’s waiver only addresses a small fraction of Georgia’s uninsured – at a platinum price.

What Does Governor Kemp’s Plan Waive? 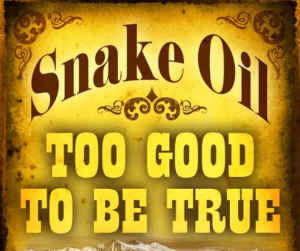 Elimination of the HealthCare.gov Enrollment Portal: First, the Governor’s waiver will ban Georgians from using the HealthCare.gov website to shop for ACA health coverage plans. Instead of one-stop shopping on the federal portal, Georgians will be required to visit the websites of numerous private brokers to compare various ACA plans. This means these brokers may offer additional non-ACA compliant plans to unsuspecting purchasers. Kemp called HealthCare.gov “simply awful,” but failed to point out that the Trump administration has been sabotaging the website ever since he took office in 2016 — by cutting marketing & education funds and removing helpful links.

Reinsurance: Second, the Governor’s waiver includes “reinsurance” for private plans on the ACA marketplace. In other words, the government will pay the big, expensive claims so private companies don’t have to. This corporate subsidy is meant to lower ACA plan premiums for consumers who purchase plans on the healthcare marketplace. This could work, but allowing brokers to simultaneously steer healthier people into cheaper plans with less coverage would negate any benefit reinsurance has to offer. And as we have seen time-and-time again, government paid corporate subsidies are rarely passed along to consumers, but instead tend to turn into profit that lines the pockets of CEOs.

Medicaid Expansion: The Affordable Care Act allows states to expand Medicaid, and Kemp’s waiver expands Medicaid to 100% of the Federal Poverty Level, instead of the 138% called for in the ACA. Although it is commonly believed that anyone can get Medicaid if they are poor enough, this has never been the case in Georgia. Currently, to qualify for Medicaid, you must be disabled, a parent receiving cash aid, or a low-income pregnant woman, child, or elderly person.

According to the Governor, his waiver makes Medicaid accessible to about 50,000 additional low-income people, but with substantial strings attached — these Georgians can only keep their Medicaid IF they document 80 hours of qualified work activity per month. Kemp not only leaves out 350,000 uninsured people who could qualify under full Medicaid expansion, but ensures that people who are too sick to work, home caring for sick family members, or who lose their jobs, also lose their healthcare.

Then, he claimed the Democrats’ plan costs too much. He admits his waiver plan will cost $218 million, yet the legislature had a fiscal note prepared last year that said full Medicaid expansion would cost only about $200 million – $18 million less than Kemp’s plan.

Kemp also doesn’t want us to remember that our federal tax dollars have already paid for Medicaid expansion. And right now, all that pre-paid taxpayer money is finding its way to 39 other states who HAVE expanded Medicaid, including some under Republican leadership.

Let that sink in. Kemp is so averse to helping Georgians in need that he’d rather throw your tax dollars at other states.

What Should We Do?

Over and over again, for the last 30 years, I’ve watched profit come before healthcare. I’m sick and tired of this imbalance, and millions of Georgians are literally sick because of it. Governor Kemp and his fellow Republicans insist on market-driven, profit-based healthcare because they just don’t care who gets trampled in favor of corporate interests.

Our government should work to ensure that basic human needs are met with the same energy that it uses to foster a profit-driven economy.

If Governor Kemp actually listened to all of his constituents, he’d find that not everyone is happy with their private plans. In some cases monthly premiums and deductibles are so high, people can’t afford to visit a doctor. Access to healthcare is often disrupted while insurance companies and doctors argue about contracts. And even though the legislature has talked a good game about surprise billing, they’ve stopped well short of banning the practice.

That’s why my healthcare approach is to provide for a public option, modeled after the popular PeachCare for Kids program. Under this plan, anyone, no matter their level of income or access to an employer sponsored plan, could choose to purchase the PeachCare Public Option. The cost would be not a penny higher than what it costs the government to provide the service. Which incidentally, would be up to 10% lower than the cost of equivalent private plans.

This plan provides a viable alternative for people whose private plans are not working for them. Close to 20 other states are taking a serious look at adopting a public option for healthcare. It’s time Georgia does the same.

While Governor Kemp has been spinning his wheels for 18 months, spending 2.5 million dollars “studying” what to do about the uninsured, millions of people have gone without treatment for health issues that put them at higher risk for being hospitalized or dying from COVID, especially Black people.

And since the Governor’s plan doesn’t go into effect for another 8 months (July 2021), even the small number of Georgians this plan is meant to help will continue to go without care through what is expected to be the worst surge yet of the COVID pandemic.

This is no time for Republicans’ approach to “caring,” it costs us too much. Join me in making sure we send a strong message at the polls that our healthcare belongs to us, not corporate interests. Use the remaining days of this election season to make sure the people around you who value decency and democracy VOTE!

Yard Sign
Volunteer
DONATE
Our Future Has Yet to be Written

If we win, what next?
Scroll to top