I firmly believe that we must have a diversity of voices to ensure a thriving democracy. It follows that to protect our country from tyranny, we must make voting easily accessible to everyone.

Two years ago on election night, my campaign volunteers retrieved vote counts directly from all 48 precincts throughout the district. When totaled, my opponent had slightly more votes, but we knew we still needed to add in the early votes. We did the math, and it was clear I had won. My opponent called to concede, and he pointed out that my winning totals came from early voters—insinuating that if “those people” had not voted, he would have won.

The Republican approach to voting has not changed: their constant voter suppression tactics show they don’t want you to vote unless you are voting for them. And adding to the confusion of the pandemic, Republicans are trying to sow distrust in voting-by-mail.

If Trump wins the election day vote, many democracy experts are concerned that he will try to call the election based exclusively on election day numbers. Those who voted by mail or who voted early risk being marginalized and disenfranchised. If this happens, we must call it what it is, a coup: “a sudden, violent, and illegal seizure of power from a government.”

It’s not an exaggeration to say that this administration already has employed tyranny to achieve its goals. Civil and human rights have been violated when people use their voices peacefully for change. They have been subjected to excessive force from riot squads. They have been pulled into unmarked vans by federal agents. They have been told that if they believe that Black Lives Matter then they are the enemy – simply for exercising their constitutional right to free speech and peaceable assembly.

I wouldn’t be surprised if Trump later calls all early voters and mail-in voters a threat to America.

We must use our vote even if we are worried about the sanctity of our election and its processes. We must make our voices heard so overwhelmingly that they cannot be ignored.

We cannot allow this administration and local Republican leaders to pervert the peaceful exercise of our constitutional rights into “threats” or “anti-American” actions.

Here is what you can do today to help make sure your voice and your vote counts:

Know Someone Who’s Not Registered? Maybe a grandchild, or someone’s girl/boyfriend? Get them registered to vote before October 5th so they can vote in November. I recommend registering on-line at https://registertovote.sos.ga.gov/. It takes 3 to 4 weeks to process and the deadline is October 5, so do it today!

Absentee Ballot Tips: Ballots are beginning to arrive. Now what? Here are some tips from DeKalb Board of Elections Member, Susan Motter. Please share these tips with others. Many people are voting by absentee ballot for the first time.

You’re ready to vote, but what about those amendments and referendums? And what about that Special Election with 21 candidates?

Special election to replace Sen. Isakson: The list of 21 candidates includes Republicans and Democrats. The best chance for a Democrat to make the run-off is to coalesce around a single choice, which is Raphael Warnock. The names are in alphabetical order and he appears near the bottom of this rather long list.

Constitutional Amendment 1: Dedication of Fees.
Through the years, the Georgia General Assembly has passed legislation requiring certain fees to go into specific trust funds. Examples include the Tire Disposal Fee, which is supposed to be used to clean up landfills and dumps; and surcharges on traffic fines, which are supposed to be used for drivers’ education. However, during times of economic hardship, these funds are often diverted into other causes that are considered more urgent. So in essence, the legislature has not kept its word. Amendment One fixes this problem. It proposes a constitutional amendment that would allow legislators to dedicate fee revenue for specific purposes for up to 10 years, at which time it can be renewed. But if there is a financial crisis, the legislature could suspend the fee allocation and free up the revenue to go into the general fund to cover things like education and healthcare. Vote YES.

DeKalb Ethics: The DeKalb Ethics Board has been dormant since the Georgia Supreme Court ruled its appointment process unconstitutional. The first attempt to fix this through a referendum would have weakened ethics enforcement and voters accordingly voted it down. During the 2020 session, legislators went back to work and passed a bill that maintains the force of the original Ethics Board. I recommend voting YES.

Gwinnett Referenda: Schools and Transit. Gwinnett county residents will decide whether to extend a one-cent sales tax for schools (E-SPLOST) and a 30-year one-cent tax for transit (T-SPLOST), including extending the MARTA rail line from Doraville to Jimmy Carter Blvd. Vote YES.

City Referenda: Brookhaven residents will decide whether or not to remove term limits for the office of Mayor, and Atlanta residents will vote on extending the $30,000 homestead exemption to homes built on nonprofit land trusts (only a handful of properties are built using this arrangement).

If you appreciate these emails and haven’t donated to my re-election campaign yet, please consider doing so now. Today is an important disclosure deadline and Election Day is around the corner.  I must be able to fend off any attempts by Republicans to reclaim this district. Any amount helps! 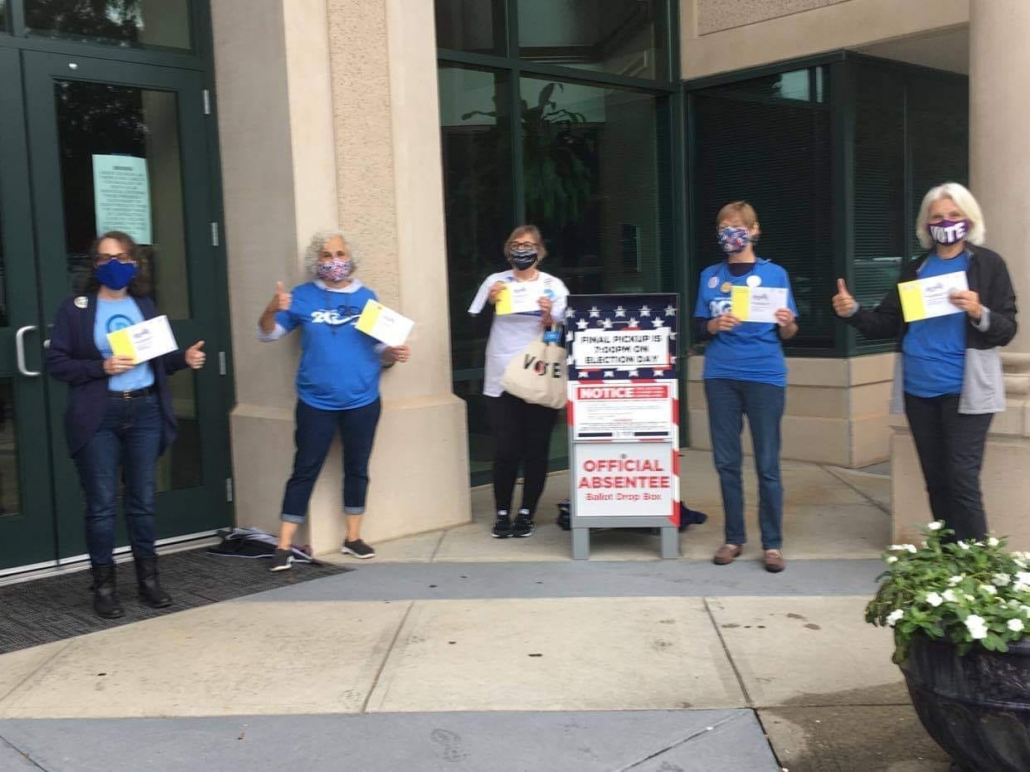 From Hazel Segall in Dunwoody: “We all decided that Absentee voting was easy, convenient, secure, COVID-19 safe, and we could wear our campaign swag.”

Our Future Has Yet to be Written
Scroll to top