Silence is a Strategy

The worse the news gets about Georgia’s COVID spread, the more silent the Governor’s office gets. And that’s no accident. Silence is being used as a strategic tool. The data I’ve studied says that COVID hospitalizations are rising quickly. Within a week or two, things could be really bad.  As I’ve often said, it’s time to “Be Loud!” If you want to know how the Governor intends to intervene, I suggest you call his office at 404-656-1776. Ask the Governor when he will step up with meaningful action to really fight this pandemic. And if he won’t do that, ask him to at least get out of the way and let local officials do what’s best for their own communities.

Just How Bad is it?

To answer this question, I compared numbers from Georgia Emergency Management Agency (GEMA) for June 30th and again for July 9th to get a sense of how quickly the situation is escalating. Here’s what I found.

The GEMA “Situation Report” divides Georgia into 14 regions and tracks the capacity and availability of in-patient and ICU beds. On June 30th, across the state, 75% of ICUs were in use, and 76% of in-patient beds. Nine days later, both these numbers have increased to 83%. At this rate, the situation could be dire by the end of the month.

At the regional level, on June 30th there were three regions with in-patient beds at 80% or higher. Now there are eight. Regions with ICU bed capacity at 80% or over went from six to nine, and regions with ICUs over 90% capacity shot up from zero on June 30 to six now. Ventilator availability is still good for now — only 35% of the ventilator supply is in use (up from 32% on June 30th).

On June 30th the regions with the highest increases in hospital admissions were Athens, as well as the Atlanta suburbs to the west (Cobb, Douglas & Paulding) and south (Henry Co. down I-75 to Macon). Now, according to the July 9th data, Columbus, Savannah, Brunswick, and Gainesville are also showing high numbers. Coastal Georgia is particularly worrisome, with ICU capacity at 99%.

The Savannah Morning News reports that cases quadrupled in June and continue to rise. Hospitals are adding bed space in meeting rooms and auditoriums and are postponing some non-COVID acute surgical care. PPE in Savannah seems to be in good supply. But here’s this — Memorial Hospital in Savannah stated that “the hospital system is planning for this situation to persist until March 2021.” St. Joseph’s Hospital in Savannah has purchased $600,000 worth of beds that they say will be in place by September 1st.

Columbus area hospitals, where GEMA reports a 23% increase in in-patient admissions, are being a bit more close-lipped. However, Columbus Mayor Skip Henderson is publishing some pretty scary data, and using it to urge people to wear masks and social distance. Savannah’s mayor recently defied the Governor’s order that no local government pass ordinances stronger than the State’s Executive Orders, by requiring masks to be worn. Other cities around the state have followed suit, and the Governor is fighting back claiming these orders are illegal.

The situation we are in is frightening and it’s easy to feel hopeless. I have said before, hope is a choice, and choice is embodied in action. So in the face of crisis, choose to do something. Call the Governor’s office and break his silence. Use the ballot box to change the direction of the county. Donate to a political campaign to help fight for humane leadership. The future of our country depends on it. 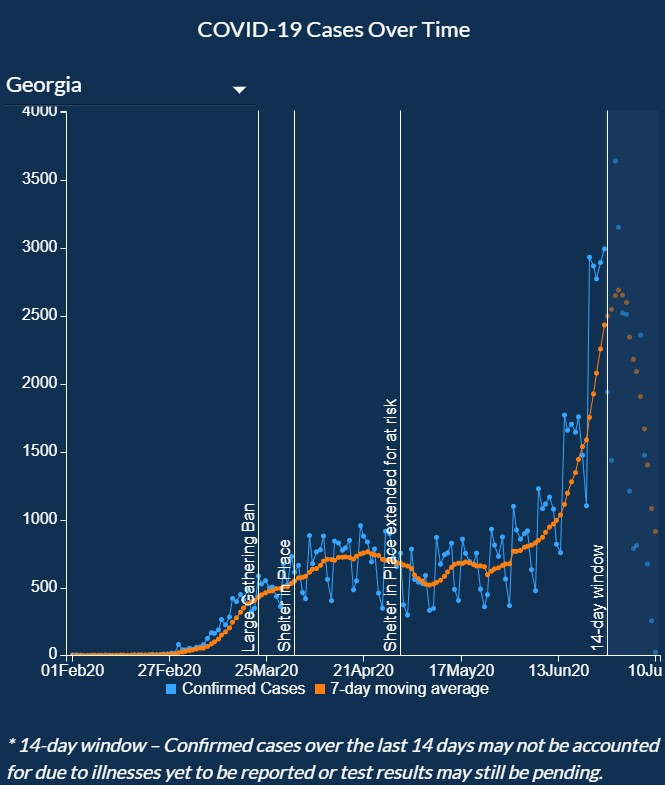