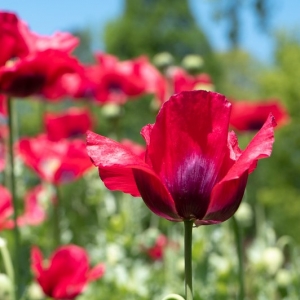 My grandmother, born in 1894, was active in the American Legion, so my mom carried on that tradition. I remember going with mom to our local bank to hand out paper poppies, handmade by veterans to raise money for veteran healthcare. Mom taught me to approach the businessmen by saying, “Poppy, sir?” The gentleman would hand mom some spare change, putting the poppy into the buttonhole on his lapel. Photo Credit: Marc Merlin

The poppy, like Memorial Day, reminds us to reflect on the legacy of our fallen soldiers. But this Memorial Day weekend the Boy Scouts aren’t out putting flags on graves. Kids have already been out of school since March. And families aren’t excitedly waiting for the gates of swimming pools to swing open so they can take their inaugural summer splash.

Like many of you, I’ve been “sheltering” for about two months. As a friend says, “I can only think four weeks at a time.” So we’ve been at this about 8 weeks, two four week “chunks”, and we’re about to start a third chunk. Time to take stock.

Last March, I wrote that we have all “the right stuff” to get through this. Some of that “stuff” is beginning to reveal itself:

Bringing it all together: South Georgia farmers have been hit hard. School and restaurant closures mean no one’s buying their crops. Bring together those farmers, DeKalb county, $40,000 of federal CARES Act money, and you get 600 boxes of Georgia-grown produce and 600 boxes of frozen chicken distributed to families in need. Bringing it all together means crops don’t get wasted and people don’t go hungry.

A New Vote-by-Mail System: As Georgia’s Secretary of State, Brad Raffensberger, said during a recent conference call with legislators, “It usually takes 6, 7 or 8 years to put a (Vote-by-Mail) system like this in place.” Utilizing Georgia’s existing absentee ballot program, almost half-a-million people have already cast their ballots by mail for the June 9th primary. Georgia received 10.8 million in CARES Act dollars designated for elections. The scary thing is that seven million dollars have already been spent (4 million on printing and postage alone), and we still have the November election to get through, when many health professionals are predicting a second wave. Call your congressperson and tell them we need federal assistance to continue Vote-by-Mail in the November election.

You still have a little more time to request a ballot if you do it quickly! Secretary Raffensberger said they are now processing Vote-by-Mail applications in “real” time (2 – 4 days). Print the application, fill it out, and either mail it or email it to your local elections office. If you don’t have a printer, or if you have any questions regarding voting, call the Voter Protection Hotline at 1-888-730-5816.

Click here for Vote-by-Mail Dropboxes. Click here for dropboxes in DeKalb. If you choose to mail your ballot, I’m told you generally need one stamp, but two for Gwinnett (Gwinnett’s ballot is longer since it’s printed in two languages).

The Democratic Party of Georgia advises Voting-by-Mail for your safety. Also, the Secretary of State’s office is asking people who started the Vote-by-Mail process to stick with it, if possible, rather than switching to in-person voting. If you show up to vote in person after requesting a ballot, a poll worker must cancel that ballot, which takes time and leads to longer lines. If you have an absentee ballot and need to vote in-person, it helps to bring the ballot with you (although this is not mandatory).

Test Kits: Georgia continues to work on ramping up testing, with over 100 test sites now located across the state, and 200,000 test kits promised from the feds (30,000 have arrived). Unfortunately, Georgia has been artificially inflating test numbers by including antibody tests in the totals. (More about this below). It is currently recommended that 2 percent of the population be tested every month. In DeKalb that means we should be testing 15,000 people per month. Clearly, we have a long way to go. DeKalb’s Board of Health director reports we don’t even have a system in place in DeKalb to know exactly how many are being tested, because we don’t yet have a county level sharing platform. Some businesses, such as Emory and MARTA, have begun doing their own testing, which is not recorded in any official capacity.

Contact Tracing: The State’s Contact Tracing program has hired and on-boarded 500 tracers. These tracers are now following 3300 COVID positive individuals and 9000 of their contacts. By mid-June they will have 1000 tracers. Johns Hopkins estimates needing 7 tracers per 100,000 people. The State has promised DeKalb 60 tracers, slightly above the recommendation.

Quarantine: COVID-positive people are asked to quarantine at home, but many people do not have a way to isolate themselves at home, and live with vulnerable family members. This week, I spoke with Insurance Commissioner John King, Doraville’s former Chief-of-Police. Gen. King is heading up the response in Hall county’s hotspot. I’m happy to report that Gen. King has secured the floor of a hotel for quarantine space. However, Gen. King said it’s hard to convince people to use it. Many of Hall county’s COVID positive people are young males who work in the poultry plants and are asymptomatic. They just don’t see the need to quarantine. As Gen. King said, preventing spread of the virus is all about getting the message out through people who are trusted and known in a community. The key word is trust. None of this works without trust.

Data Manipulation: Speaking of trust, last week the Governor’s office came under fire for manipulating data to make it look like cases had been in decline for two weeks. This week they were under fire again for including positive antibody tests in the numbers for total tests, making it look like we are testing more people than we are. And as if that’s not enough, I’ve noticed that my calculated hospitalization numbers have not shown the drop the Governor’s office reported this week. In fact, my hospitalization totals, calculated from the cumulative totals on the Dept. of Public Health website, have increased during the last week. The Governor’s numbers do not include people who are “under investigation for coronavirus.” And according to NBC news, even if they had a positive COVID test before being admitted, they are still “under investigation” until they have a hospital administered positive test. With labs backed up, it’s quite possible that some people could be discharged before test results return. A quote from the Scottish poet Andrew Lang seems apropos: “He uses statistics as a drunken man uses lamp posts — for support rather than for illumination.”

Hospital Lay-Offs: Much has been said about how we need to protect our healthcare workers. But now that the surge is over, instead of getting a little rest, healthcare workers are being laid off. This is because hospitals are reporting losses of hundreds of millions. Patient volumes are down. Emergency rooms are at 34% utilization, way down from normal, and people are coming in more sick due to delayed care. In-patient beds normally stay 80 – 90% full, but they are down at least 25%. In a for-profit healthcare system, these losses are not considered sustainable. What if our nurses, already in short supply, decide it’s just not worth it, and leave the profession? Without them, we are toast. A for-profit healthcare system during a pandemic is not sustainable.

COVID is about to break our healthcare system.

Georgia’s unemployment rate hit 11.9% in April. More than one out of every ten workers is without a job, worse than anything we saw during the Great Recession. Many of these workers have also lost their health insurance. In 36 other states, these workers can sign up for Medicaid, but not in Georgia, because we did not expand Medicaid. When you see underutilization stressing the financial viability of Georgia hospitals, you are seeing the effects of people afraid to seek care. Not because they’re afraid of catching COVID, though many are, but because they know they can’t afford the care. If you end up hospitalized with COVID, it will cost you an average of $78,000. How many people have that much spare change?

We can create policy that takes the profit out of healthcare. We can expand Medicaid in Georgia. We have an election coming up this November and it’s a big one. Get your friends to vote like their lives depend on it. Because they do. 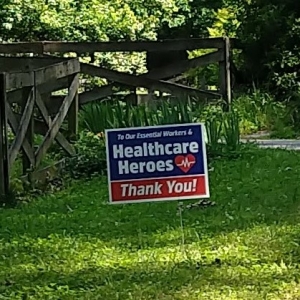 Yard Sign
Volunteer
DONATE
Time to Get Out the Vote!

Will Georgia Pass a Hate Crimes Bill?
Scroll to top