For the first time since Senate 40 was drawn, Democrat primary ballots outnumbered Republican ballots, and it wasn’t even close! The spread was 18 points — 59% to 41%

Looking at these primary results, it’s clear that voters are increasingly dissatisfied with Republican leadership, and they are ready to do something about it.

In the May primary, Democratic statewide turnout doubled from the last midterm. But here in Senate 40, we more than tripled the Democratic turnout.

We have shown that our plan and approach works, and we can deliver the votes. We have also shown without a doubt that this district should have a Democrat Senator and that it can be won — if we can get our message out to enough voters.

The June 30th Campaign Finance deadline is around the corner and sets the tone for November’s general election. We need 500 people to give an average of $100 each so we get our message to 50,000 voters. Or give less and check the “recurring donation” box. We need everyone to be part of the solution!

Take action today to ensure that we change the players at the Gold Dome. It’s the only way we can change the policies.

Please click “Donate” at https://sallyharrell.org and make your $100 contribution today. 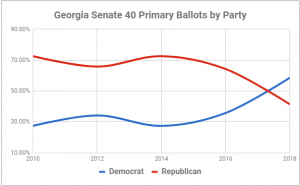 On May 23rd, Georgia’s 2018 primary will be over. And if you’re feeling like me (and you probably are), you’re ready to put this stage behind you.

Through the years, I’ve seen Democrats fight hard to avoid having primaries. For one, primaries cost money – money that could be used to fight far-right Republican agendas. We need to get ready for the upcoming BIG fight and you can help us start strong! Please make a donation today to help us refill the coffers: Click to Donate.

For the last three months, my husband Jay and I, along with dozens of volunteers, have been running a primary campaign. By the time it’s all over, we will have held 25 Meet & Greets and events in people’s homes throughout State Senate District 40. And I have personally spoken with hundreds of our most active community members. We’ve energized each other; we have learned from each other.

During this process, I learned that the values that I hold dear resonate even more now than they did when I entered the Georgia House for the first time in 1999.

There is a rising chorus of voices who believe now more than ever that there IS a positive role for a state government that puts people first; that state government protection IS critical for our those of our citizens who are threatened with racism, xenophobia, and homophobia.

I’ve learned that residents of State Senate District 40 really care about protecting public education, providing affordable healthcare to all, and coming together to deal with our traffic woes.

I’ve also added a few things to the list from our discussions: People in communities across Senate District 40 want to make sure affordable housing remains available. They want better schools and smaller prisons, and decriminalization of marijuana. They demand social justice for the incarcerated and improved public safety. They strongly believe in common sense gun reform. And they want our senior citizens and our citizens with disabilities to be cared for in a dignified, compassionate way.

They want to show the rest of the country and the world, who Georgians really are – kind, entrepreneurial, hard working, and welcoming.

No matter the outcome of the primary election, the benefits of these gatherings have made a lasting impact on me, and I hope the direction of our party.

Are you ready for May 22 and the important work we all have to do after?