Who’s That Rapping at the Chamber Door?

“Mr. President, The Honorable John F Kennedy, Senator from the 18th district, and newly-elected President Pro Tem of the Georgia Senate, awaits entrance into this chamber!”

Opening Scene: The theatrics of the first day of session are so much fun! The opening scene features the Secretary of the Senate playing the role of the Lt. Governor, who normally presides over the Senate, but has not yet been sworn into office. (I spotted the real Lt. Governor standing in the wings watching this drama unfold.)

The Cast of Characters: The Secretary of the Senate shares the news that the Secretary of State has certified the November election, calling out every elected Senator by name and district.

The Oath: The Senators collectively take the Oath of Office, surrounded by a chorus of family members. Georgia Supreme Court Justice Charlie Bethel played himself this year and administered the Oath. I swore my Oath on a copy of the Georgia Constitution.

The Election: Once sworn in, the Senators elect the lead roles. One at a time, the Secretary of the Senate, the President Pro-Tem, and the Sergeant-at-Arms wait outside the main door of the chamber so they can be officially invited inside and led down the aisle by a Committee of Escorts. Members of the cast and chorus shake their hands on the way in.

The Announcements: Finally, the Senators get to work. Did you know we actually pass official Senate Resolutions just to announce that we’re returning to work? SR 1 notifies the House that we have convened, and SR 2 directs 14 people to go tell the Governor we’ve returned to work.

The Plot Thickens with Failing Rules

Expanding Legislative Privilege: The Senate got off to a bumpy start when the Republicans failed to pass their own Rules (SR 3). Back when I served in the House, I don’t remember the Rules being so contentious. But since I’ve been in the Senate, I’ve noticed a pattern of amending the Rules because a Senator gets in some kind of trouble. This year several changes focused on expanding “legislative privilege.” Lawmakers are already exempt from Open Records laws. The new Rules extend that privilege to conversations we have with each other, and with third parties. My guess is that these changes stem from Fulton County’s investigation of the attempt to overturn the 2020 election.

Leaving on a Jet Plane: Democrats opposed the new Rules because the public deserves an open and transparent government. Republicans fell one vote short of passing their Rules on Monday because several of their members were absent. Yes, you heard that right. It’s highly unusual for legislators to miss their own swearings-in. Years ago when an ice storm hit on the first day of session, state troopers were sent out to pick up members. Instead of an ice storm, this year it was a National Championship football game that kept some Republicans away.

All of this had a negative domino effect on the rest of the week — delaying seat, committee and office assignments.

Governor Sightings: All week I’ve been trying to piece together the Governor’s agenda by attending various events where he has spoken. This included the Georgia Chamber of Commerce’s Eggs and Issues Breakfast, a huge event held at the Georgia World Congress Center. The Governor also spoke at the State Dinner, held in the Capitol Rotunda for the first time ever. Finally, I heard the Governor speak at Friday’s Annual MLK Celebration. Here’s what I predict will be a main theme of the 2023 Legislative Session:

The “W” Word: This session will be brought to you by the letter “W”, as in “workforce” — ensuring workers are adequately trained, and making sure they have a place to live and work locally. Democrats have long pushed for affordable housing, but now that companies relocating to Georgia are asking for the state’s help, housing has been pushed up in priority. I predict the details of how to do this to get contentious with local governments.

Narrowing Down the Narrative in Numbers

Appropriations Committee: Next week the legislature will pause to let the Appropriations Committee begin their work on the State’s $32 billion budget. The public can watch the State Agency presentations through the Georgia General Assembly website. I picked up my copy of the proposed budget on Friday and will begin combing through it, looking for more hints of the Governor’s priorities.

Disabilities Funding: I plan to work the budget process again this year to advocate for increased funding to reduce the waiting list for Medicaid disability services. This is an issue I worked on between sessions, co-chairing a Senate Study Committee that traveled around the state hearing from families and providers about the overwhelming burdens that they face.

Speaking Up Solo: Friday I spoke from the chamber “well” (the lectern in the front of the chamber) about disability issues by taking a Point of Personal Privilege. I shared with my colleagues the news of a terrible, yet preventable tragedy in Forsyth county, where an overwhelmed father killed his young adult, autistic daughter and then himself. Constituents have shared with me that suicidal thoughts are not uncommon among caregivers dealing with extreme situations. Georgia must do better.

This and several other issues I am working on will keep my plate full this session. Fortunately, I have several people helping me get it all done.

The last two years have been very quiet and a bit lonely at the Capitol due to the pandemic. This year, I’m so happy to have the company of my staff back in the office on a regular basis.

Please feel free to reach out to any member of my team for help:

Scenes from the Capitol 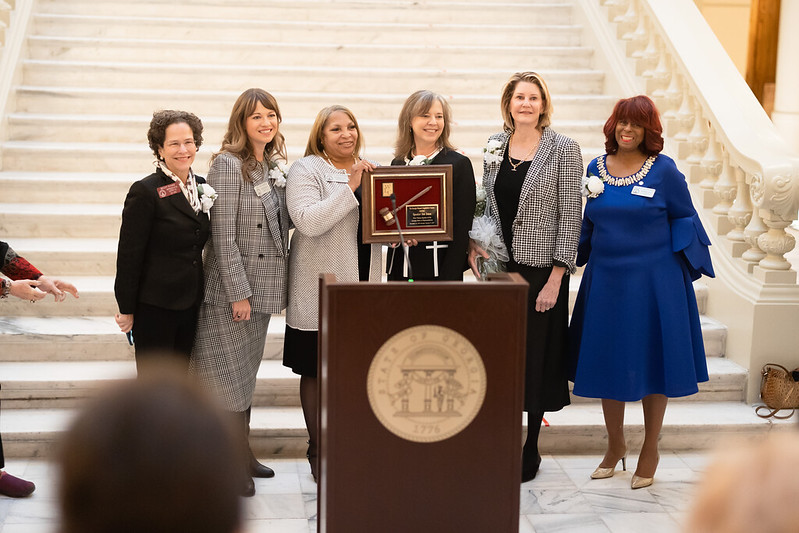 Legislative Women’s Caucus: Monday morning, prior to the opening of the 2023 Legislative Session, as Co-Chair of the Legislative Women’s Caucus, I presented Speaker Jan Jones with a dozen white roses to honor her as the first-ever female Speaker of the House in Georgia. Speaker Jan Jones assumed the role of Speaker upon the death of the late Speaker Ralston. Though Speaker Jones did not run for Speaker for the 2023/24 session, it was an important moment to recognize this moment in time. 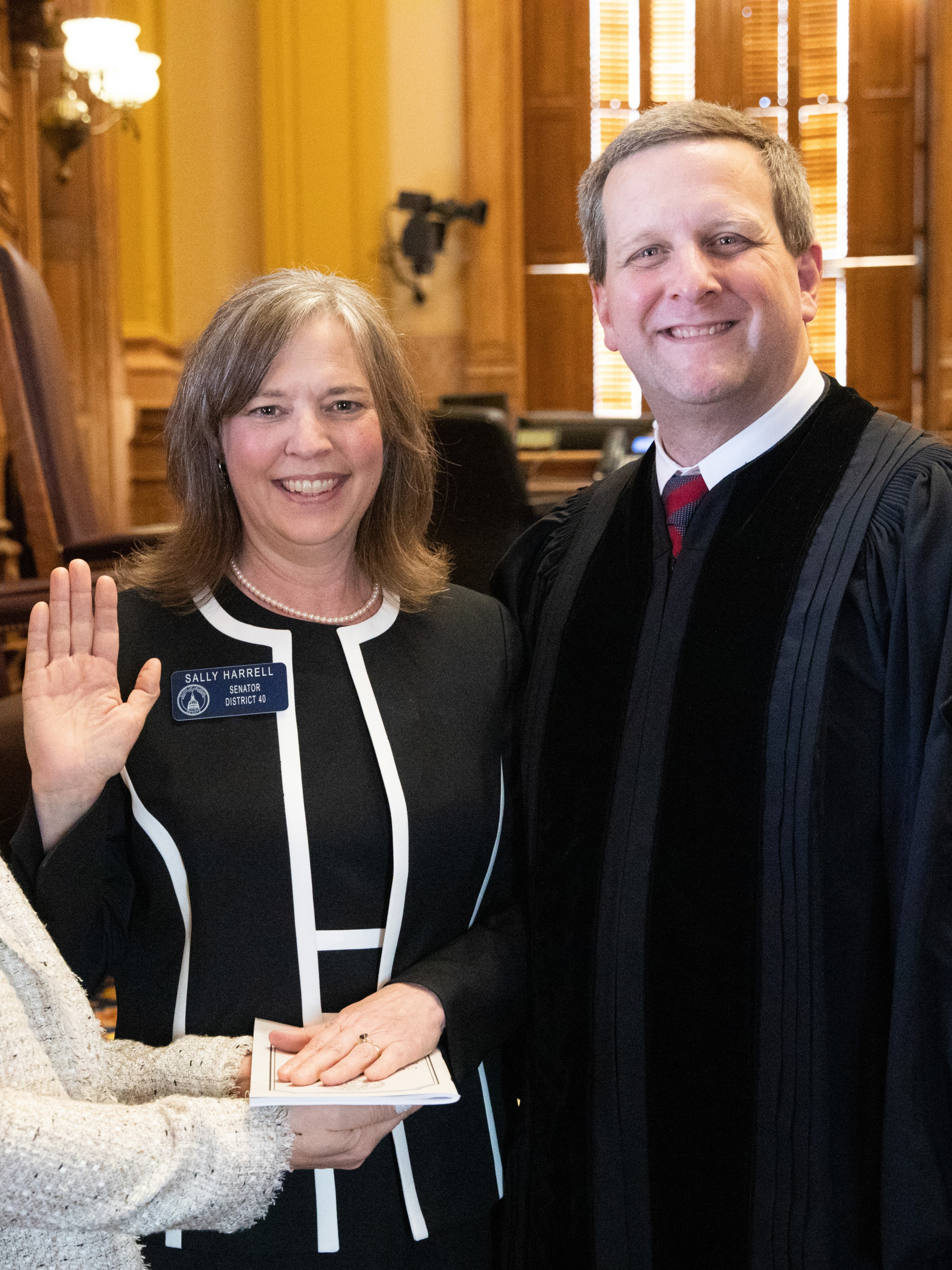 Swearing-In: It was an honor to be sworn-in Monday morning by Georgia Supreme Court Justice Charlie Bethel. 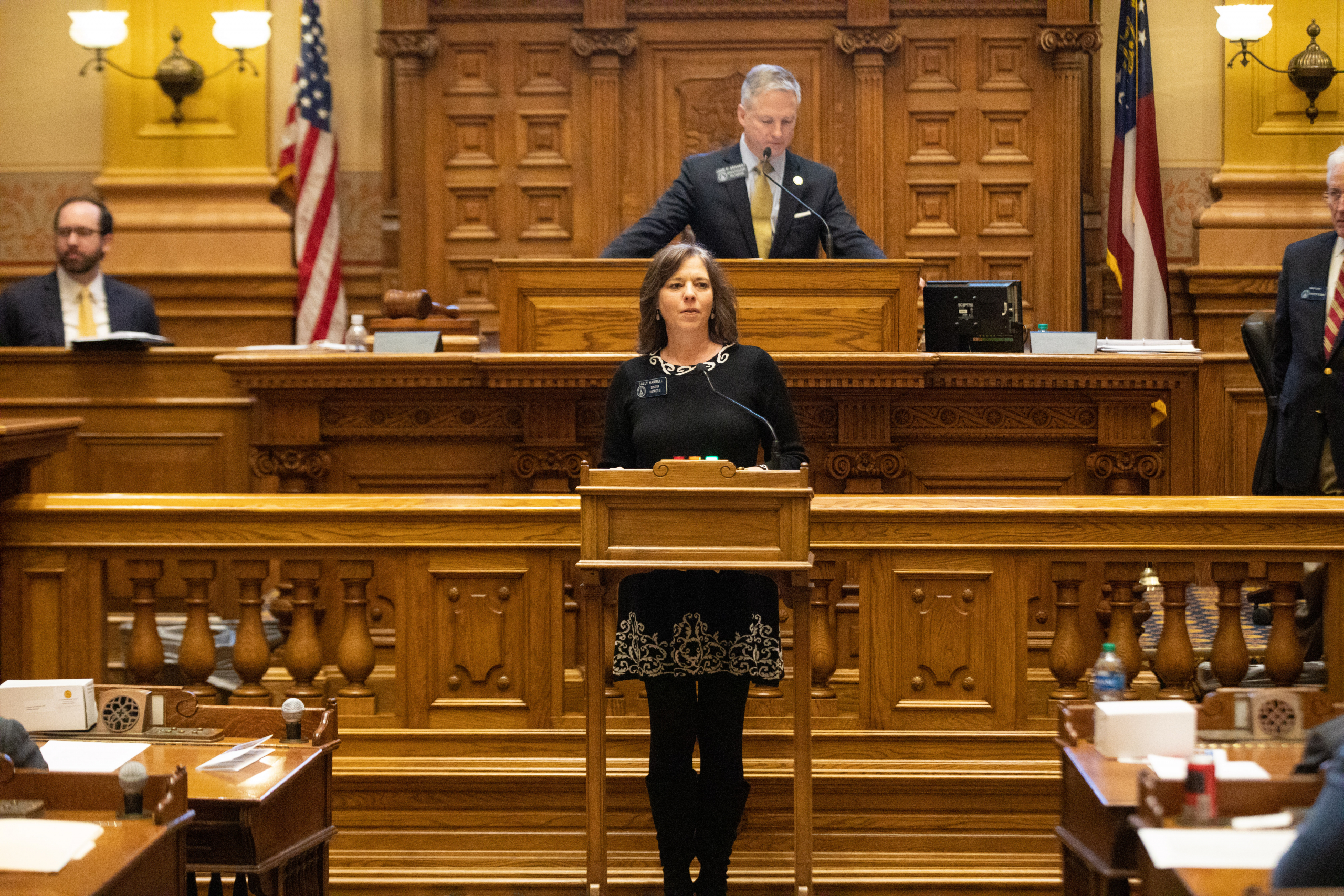